MOTORISTS in Durban were greeted by a weird sight yesterday: a luxury 16 metre yacht stuck in the middle of the N3 Western freeway.... 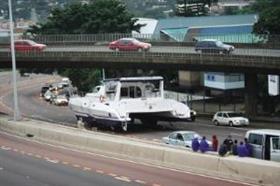 MOTORISTS in Durban were greeted by a weird sight yesterday: a luxury 16 metre yacht stuck in the middle of the N3 Western freeway.

Most had to rub their eyes to make sure they were not dreaming when the saw what has now been dubbed “Noah’s Ark” on the busy freeway.

While some motorists found the situation hilarious, others got out their vehicles to vent their anger at Metro police who tried to control the mounting traffic. Traffic was backed up to the Pavilion Shopping Centre on the N3 freeway.

The yacht, Fennessy, is believed to have fallen off its trailer and then slid onto the road near the Tollgate overpass, closing off three lanes of the freeway just before peak traffic began. The yacht was being towed to Durban harbour when the incident occurred.

The driver of the truck noticed the yacht lying in the road and stopped the vehicle. He then went to get help, leaving the yacht in the taxi lane of the freeway.

Metro cops who arrived at the scene shortly after the incident told The Witness that they thought the yacht had been abandoned.

The situation soon became chaotic as traffic cops tried their best to control traffic as well as handle heated arguments which soon broke out amongst motorists.

One woman, who was trying to get her son to his exam, burst into tears after she realised that she could not get out of the traffic jam. Other motorists switched off their cars and stood outside.

He said the road was closed from 45th Cutting and that some motorists took the Brickfield Road off-ramp to get off the freeway.

Owner Ken Bircher said a cable which secured the yacht had snapped, causing it to fall off the trailer. He said it was a huge job to remove the yacht from the road and that huge cranes would be needed.

“Luckily there was not much damage to the yacht.

“We are still waiting for a crane to remove it. I’m not sure if it will be removed before the afternoon peak hour traffic,” he said.

Bircher apologised for the inconvenience faced by motorists who were stuck in the morning traffic.

Metro police spokesman Superintendent Joyce Khuzwayo said police would be called in to monitor traffic during the afternoon peak hour traffic and while the yacht was being removed.