THE boiling hot weather experienced yesterday will give way to widespread rain and thunderstorms, with heavy rainfall likely in some areas this week.... 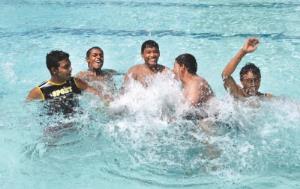 THE boiling hot weather experienced yesterday will give way to widespread rain and thunderstorms, with heavy rainfall likely in some areas this week.

The SA Weather Service forecast yesterday that a steep upper air trough system will generate a band of scattered to widespread showers and thundershowers over the central and south-eastern parts of the country, associated with strong north-westerly surface winds.

“The upper air trough will move into the western interior on Tuesday [today], causing moist air in the low- and mid-levels of the atmosphere to flow southwards from the tropics to the central and eastern parts of South Africa.

“This will result in an eastward shift of the band of rainfall, with widespread rain and thundershowers affecting many parts of eastern and central South Africa.

“Heavy rainfall can be expected in areas in the Free State, the eastern half of the Eastern Cape, Lesotho and KwaZulu-Natal …”

The upper air trough will move to the central interior tomorrow, causing scattered to widespread rain and thundershowers in some areas in the east of the country.

There is a chance of heavy rainfall in parts of KwaZulu-Natal and Mpumalanga.

The weather service has predicted an 80% chance of rain for Pietermaritzburg today with 32 mm expected, and a comfortable high of 24°C.

There is a 60% chance of rain predicted for tomorrow with 40 mm expected.