Success in the park

WHILE this year’s Nashua Art in the Park didn’t achieve the record figures of last year, the event still proved to be a huge success.... 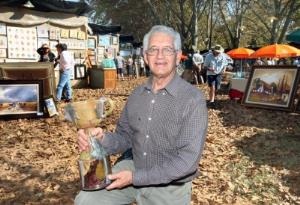 WHILE this year’s Nashua Art in the Park didn’t achieve the record figures of last year, the event still proved to be a huge success.

Melanie Veness, director of Pietermaritzburg Tourism, which organises the annual event in Alexandra Park, said she is really pleased with how things went. “The event was pretty busy — busier than last year, except for the slight slump during the Blue Bulls game on the Saturday.

“People were expressing a reticence to buy because of the recession and we were expecting a bit of a knock. But this didn’t happen to the extent that we expected at all. Our figure for this year is a little short of the R2 million mark, at R 1 949 192 — which isn’t bad for five days in a park in the middle of a recession.”

Veness said visitors had also complimented them on the diversity and quality of the art on show.

The top-selling artist at this year’s event was Kobus Kotze from Bloemfontein — the second year in succession he has taken top honours — and, this year, for the first time, he received a trophy for his efforts.

“Being top seller is an exceptional achievement and I really wanted something special to acknowledge that and a trophy that would reflect the special ambience and character of Nashua Art in the Park,” said Veness.

The new trophy was designed, created and donated by midlands ceramicist, Trayci Tompkins. “It has plane tree leaves and paintbrushes on it,” said Veness. “We are going to acknowledge top sellers from the past 10 years on the trophy.”

The biggest selling KZN artist was Art in the Park veteran Mat Lourens who was exhibiting his beautiful watercolours and sand paintings for the 30th year. In third spot was first-time exhibitor Kim Hofmeyer from Winterton.