THE depleted Stormers all but settled the South African conference of Super Rugby with a massive 19-14 weekend win over the fancied Bulls at Loftus, while the Sharks’ challenge was ended by the superb Lions outfit at Ellis Park... 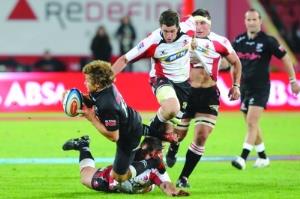 THE depleted Stormers all but settled the South African conference of Super Rugby with a massive 19-14 weekend win over the fancied Bulls at Loftus, while the Sharks’ challenge was ended by the superb Lions outfit at Ellis Park.

The Waikato Chiefs edged four points clear at the top of the standings — but have still to play the Crusaders — while the second-placed Stormers have a relatively easy run-in and have a five-point advantage over the Bulls in the South African conference.

The Sharks have dropped to seventh place after their 38-28 loss to the lowly Lions and now face a tough battle to make the top six for the play-offs.

The Lions scored only their second win of the season and it was an action replay of last season’s Currie Cup final, when they stunned the Sharks early on and then held on tenaciously for the Ellis Park victory.

It was the first time that the no-name brand Lions have beaten the Springbok-laden Sharks in the Super Rugby competition, and it was thoroughly deserved.

In spite of being reminded all week that the Lions would be ready, the Sharks were caught by surprise as everything that could go wrong did. Passes were dropped, lineouts lost and tackles missed.

The Lions, in contrast, did everything by the book, knocking back the Sharks’ big runners around the fringes, using chip kicks into space to great effect — and ruthlessly — slickly finishing off attacking sorties with tries.

By the time they had wiped the sleep from their eyes, the Sharks were trailing 25-6 after 25 minutes, following tries by Lions flanks Derick Minnie and Grant Hattingh and wing Lionel Mapoe. Deon van Rensburg scored the Lions’ bonus point try by half time and the Sharks were down 11-32 at the break with wing Lwazi Mvovo, rounding off a rare sustained movement, providing the only cheer.

But when JP Pietersen and Odwa Ndungane scored tries within three minutes after the break, and the Sharks trailed by only seven points, it seemed that sanity would return. But for the first time all season, the Lions kept going to the final whistle and the Sharks fell back on bad habits as they wasted a number of attacking chances.

The game did end on a controversial note when the Sharks thought they had scored through Louis Ludik, and the assistant referee agreed. After some confusion, the TMO ruled otherwise and the Sharks, instead of picking up two log points (for finishing within seven points and scoring four tries) returned home empty-handed.

It was no more than they deserved on this showing.

There was a bruising contest at Loftus where the Bulls had the territory and possession to win, but were denied by the superb Stormers’ defence.

The Stormers trailed but hung on desperately for most of the game, and the Bulls certainly should have made more of their opportunities. The Stormers were reduced to 14 men — prop Frans Malherbe was given a yellow card midway through the second half — but the Bulls, turning down a goalable penalty, could not add to their 14-9 lead.

It came back to haunt them eight minutes from time when Stormers wing Bryan Habana scored the winning try from a turnover and their campaign is again back on track after their loss to the Sharks.

A record-equalling four tries to Fijian winger Asaeli Tikoirotuma enabled the Chiefs to overcome the improving Blues 41-34 in a frantic New Zealand derby in Albany on Saturday.

New Zealand’s Hurricanes leapfrogged the Sharks into the top six with a 33-12 bonus-point win over the Waratahs in Sydney on Saturday.

Super Rugby will resume on June 30 (when the Sharks have a bye).