SuperSport lucky to come away with draw in brutal game

IN a game that at times verged on the brutal in the physical and aesthetic stakes, SuperSport United were fortunate to come away with a 2-2 Premier Soccer League draw against Maritzburg United at Harry Gwala Stadium last night.... 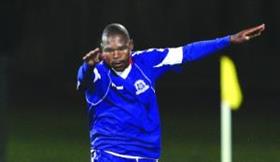 IN a game that at times verged on the brutal in the physical and aesthetic stakes, SuperSport United were fortunate to come away with a 2-2 Premier Soccer League draw against Maritzburg United at Harry Gwala Stadium last night.

The match kicked off 45 minutes late because the lights went out in the build-up to the game.

Maritzburg survived a torrid first 20 minutes in which they conceded the lead to Jabu Maluleke’s free-kick, and fought their way back into the game in the fiery fashion that has become their trait at Harry Gwala.

An inspired passage of play saw the home team snatch the lead with goals by Diyo Sibisi and an on-fire Rudolf Bester in the 65th and 67th minutes.

A defensive lapse allowed SuperSport to head in an equaliser in the 75th minute.

It was United’s fifth league and cup match unbeaten and another valuable point clawed from the three-time league champions. And if United continue to give hell to teams on their home ground in the fashion of last night’s performance, then there will be more points to come as the season progresses.

Neither team was much in sorts. SuperSport have been out of form, and Maritzburg were suffering from the effects of a high-intensity cup quarter-final on Sunday.

The champions’ renowned physical, direct style at times threatened to carve heavy-legged United to ribbons in the first 20 minutes.

Striker Jose Pereira’s header looped against the bar in the opening minutes, and balls across goal from Maluleke and Pereira were played into no-man’s land.

The youngster did not judge the flight of Maluleke’s curling free-kick from 23 metres in the 18th minute, and SuperSport had the lead.

United settled into a better attacking rhythm in the second part of the half, with Bester influential in the turnaround and showing some of his most sparkling form this season on the left. The midfielder slammed the ball into the upright in the 29th minute with an unbalanced shot from a narrow angle after being fed by Sibisi on a counter-attack.

Maritzburg grew in strength in the second half and two goals in two minutes in a devastating period of combination between Sibisi and Bester swung the game the home team’s way.

Bester’s chip in the 65th minute found Sibisi unmarked to sweep through the arms of goalkeeper Jacob Mokhasi. Then Sibisi won the ball in midfield and played the perfect through pass for Bester steaming into space on the left, who finished expertly past Mokhasi.

SuperSport equalised with a goal in keeping with the ragged nature of the match when Maluleke’s cross in the 75th minute was faintly headed past Mathole by unmarked Gould.

There were more thrills and spills near the end as United were just unable to take advantage of openings they carved.

The visitors would have been the more relieved side to leave Pietemaritzburg with a hard-earned share of the spoils.