Sykes back to beef up Sharks

FORMER Springbok lock Steven Sykes is returning to Durban from Ireland and will provide the Sharks with a massive boost for the Super Rugby competition.... 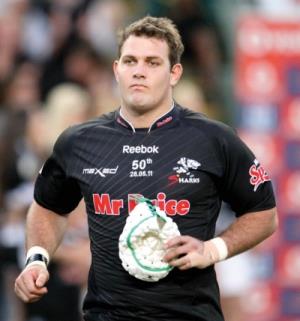 FORMER Springbok lock Steven Sykes is returning to Durban from Ireland and will provide the Sharks with a massive boost for the Super Rugby competition.

The 27-year-old Sykes left the Sharks after last year’s Super Rugby competition to join Leinster. But there were whispers last month that the burly lock was missing the warmth of Durban and yesterday Sharks coach John Plumtree confirmed his return.

Rich in experience after 130 games for the Sharks, the no-nonsense Sykes will add an abrasive edge to the pack which has suffered since losing him, Johann Muller and Gerhard Mostert to European clubs.

Plumtree was delighted that he would have Sykes back to beef up the pack.

“As soon as I heard that he wanted to come back home, I was really interested,” said Plumtree. “A player of his calibre is vital because of the experience he offers us, especially in this competition.”

Plumtree said that the Sharks now had the right mix in the second-row, with Sykes joining a number of emerging young locks in the squad.

“We have some good young locks coming through, but Super Rugby is a really tough competition, a long one, and having his experience in the second row is going to be really valuable. It also adds a little more competition for places.”

Plumtree added that the type of player he is will complement the side nicely.

“He has that physical nature to his game. He also has a number of campaigns under the belt and that is great for leadership in the pack.”

While Ross Skeate, after his excellent Currie Cup campaign last year, will compete with lineout specialist Alistair Hargreaves for the No 5 jersey, Sykes is the likely first-choice No 4 lock with Anton Bresler and Jandre Marais providing options.

Sykes was released from his Leinster contract after just six months.

“We have secured all the good young players and Springboks. None of them are leaving. We may be announcing the signing of a couple of others in the days ahead,” he added.

The Sharks have an internal trial game next weekend, meet the Currie Cup First Division champions Boland on February 10 at Kings Park and then play Eastern Province in Port Elizabeth a week later.

They open their Super Rugby campaign against the Bulls at Loftus on February 24.