A PASSION, pride and commitment that has at times been lacking was there in large doses as Bafana Bafana comprehensively outplayed Poland with a 1-0 victory in their final warm-up match ahead of the Confederations Cup at Orlando Stadium on Saturday.... 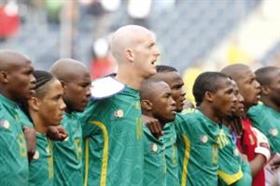 A PASSION, pride and commitment that has at times been lacking was there in large doses as Bafana Bafana comprehensively outplayed Poland with a 1-0 victory in their final warm-up match ahead of the Confederations Cup at Orlando Stadium on Saturday.

Terror Fanteni scored the lone goal into an open net in the seventh minute after South Africa’s leading candidates for Man-of-the-Match, Steven Pienaar and Bernard Parker, had done all the hard work. The result was the most encouraging since Bafana’s 3-0 defeat of Paraguay in Carlos Alberto Parreira’s last game in charge more than a year ago, and came at the perfect time.

While there is always a step up from a friendly international to a tournament, if Bafana can show the same resolve and tactical discipline in the Confederations Cup they should beat Iraq and New Zealand to qualify for the semi-finals.

Poland, a competitive and well-organised team under veteran former Real Madrid and Netherlands coach Leo Beenhakker, are ranked 39th in the world and lie third in their World Cup qualifying group. Iraq, who Bafana open the Confed Cup against at Ellis Park on Sunday, are ranked 77th and New Zealand 82nd.

The effects of being in a training camp for 20 days for the locally-based players, with the foreign-based players joining in at random, clearly showed and Bafana were, dare one say it, on the verge of being slick.

They looked fit, sharp, well-organised and kept their shape. The passing was crisp, patient and measured.

“But about the tactical positioning, we are only about 60 or 70%.

“In my opinion the players did well tactically because I only worked about three or five times on positioning. In the coming week the emphasis will be on tactics.”

With Teko Modise sure to return from his slight thigh injury, Santana is unlikely to employ the same strategy again against Iraq.

Modise and Pienaar, a livewire who was all over the park to confirm his status as a world-class player, are sure to start.

Pienaar hobbled off with a mild sprained ankle, but will resume training in Bafana’s gym session at Johannesburg Stadium today.

The pleasant headache for Santana is that all three defensive midfielders staked a strong claim for the two starting places against Iraq.

The defensive partnership of captain Aaron Mokoena and Matthew Booth held up well, though they were not put under too much pressure by the pedestrian Poles.

Itumeleng Khune pulled off two good saves in goal, which will boost his confidence.

“I think at the back we did great and Matthew did fantastically,” Mokoena said.

“The team were well-organised, especially at the back and in midfield. We created quite a few chances.

“We really wanted to win the game badly. We’ve had three weeks of training and we know there are areas we can improve on, but winning against a strong side like Poland shows we are ready [for the Confed].”

Santana said he has not made any decisions yet on whether he will retain the strike partnership of Parker, whose pace and terrier-like running caused Poland all sorts of problems, and Fanteni.

“I had one week for training with the full squad tactically — on Friday I will have my team to play Iraq.”