VEHICLE examiners who worked at the testing station that passed the truck that killed 24 people in the Field’s Hill tragedy were arrested in a sting operation yesterday... 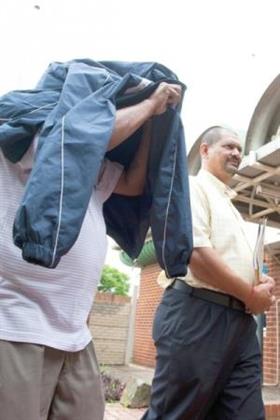 VEHICLE examiners who worked at the testing station that passed the truck that killed 24 people in the Field’s Hill tragedy were arrested in a sting operation yesterday.

Phoenix Testing Station owner Sudesh Ramdas, who owns several other testing stations and has interests in the transport sector, confirmed his station passed the truck driven by Sanele May. However, he said at the time of the accident that they had not seen the vehicle for 12 months.

Jody Pillay, deputy chief of police for the National Traffic Anti-Corruption Unit, said the arrest was the culmination of a six-month investigation.

“Through undercover operatives we sent defective vehicles into the centre, which they passed after the suspects were paid off. A third staff member arrested was, we believe, the runner and he would hand over the money to the examiner,” said Pillay.

He said the investigation is the third in KZN, with arrests on North Coast Road and Melmoth.

“We will be arresting more people in the coming weeks. We have been tasked by the Ministry of Transport to root out corruption countrywide.

He could not confirm whether the three suspects were involved in passing the truck that killed two dozen people in September. The truck driven by May could not stop due to alleged brake failure, crashing into several vehicles at the Joshua Gumede Road/M13 interchange.

May is facing 24 murder charges after his truck ploughed into four minibus taxis and two cars.

Ramdas said all three people arrested had been employed at the station for approximately five years.

“I would like to suspend them all with no pay if I could. I will talk to the Department of Transport and appeal to them not to shut it down.

“We cannot be held responsible for that [Field’s Hill] accident. We had not seen the vehicle for over a year,” said Ramdas.

He said he “had no idea” about the alleged fraudulent activity at his centre and that he would run a separate independent investigation.

The suspects have been charged with fraud and will appear before the Phoenix Magistrate Court today.