JOHANNESBURG — Indian cricket captain MS Dhoni said upon his team’s arrival in South Africa yesterday that his young batsmen now have the opportunity develop without the shadow of Sachin Tendulkar hanging over them all the time... 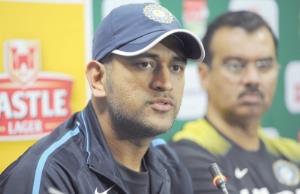 JOHANNESBURG — Indian cricket captain MS Dhoni said upon his team’s arrival in South Africa yesterday that his young batsmen now have the opportunity develop without the shadow of Sachin Tendulkar hanging over them all the time.

The Indians are in the country to play three One-Day Internationals and two Tests, starting in Johannesburg on Thursday.

“My wish is that we should not make comparisons with Rahul Dravid and Tendulkar,” he said.

Dhoni joked and said India would no longer have a number four batting position in their Test team.

“From three, we will jump to five, and then bat to number 12,” he joked, referring to the recent retirement of Tendulkar, who owned the number four position in India’s Test line-up for more than two decades.

“Whoever bats for us in that position in the future shouldn’t keep hearing that he is replacing Tendulkar,” said Dhoni. “He just needs to be a player in his own right and his own future can be determined without the pressure.”

Dhoni said although there has not been a decision taken on who will fill the number four position, it appears that it may be Virat Kohli.

India now have their the most inexperienced batting line-up in a long time without the likes of Tendulkar, Dravid, VVS Laxman, Virender Sehwag and Gautam Gambhir.

“I’m actually really glad we started with the One-Day before the Tests. It gives the batsmen a chance to go out there and play their shots without inhibition and get rid of their nerves,” said Dhoni.

“The batsmen need to express themselves and transfer that freedom to the Tests,” he feels.

“I’m also glad these young batsmen will now be exposed to conditions outside the subcontinent.

“The pace and bounce of South African pitches will be a challenge,” continued Dhoni. “I see this tour as a learning process for our players. This is a huge challenge away from home.

“South Africa’s bowlers know what length to bowl on and where to pitch the ball.”

The Indian captain added that there was no added pressure on his side, as Indian cricket was continuously under the spotlight.

“Even when we play Ireland there is pressure, so we have learned to live with it,” he said.

With not much difference in personnel between the Indian ODI and Test squads, Dhoni added that he was hoping for continuity to be maintained throughout his side’s brief stay in SA.