Durban-based kwaito music group Big Nuz will rock the stage at the Ukhozi FM concert at the Royal Showgrounds tomorrow (Sunday), says a memeber of the group, Mzi “Danger” Mkhwanazi. 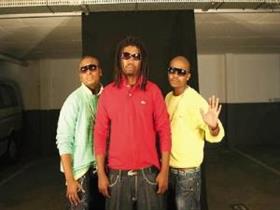 Durban-based kwaito music group Big Nuz will rock the stage at the Ukhozi FM concert at the Royal Showgrounds tomorrow (Sunday), says a memeber of the group, Mzi “Danger” Mkhwanazi.

The group, which shot to fame with the song Ubala Lolo, says they are ready to showcase what they are made off.

They will be sharing the stage with other talented artists in the country. Among them will be Zulu Boy, Shuga-smakx, Teargas, Malini, Lvovo, Professor n T’zozo , Amageza Amahle, Imithente, Sfiso Ncwane, Deborah Fraser and Dj Nzwiri no15.

The Ukhozi FM concert marks one of the biggest music concerts in the province and it was almost cancelled because of the SABC’s financial constraints.

The Ukhozi FM management pleaded with SABC management for the concert to continue as they feared its cancellation would cause huge embarrassment for the station.

Mkhwanazi says fans should come in droves to the concert as the group will have a surprise or two for them.

“On Sunday, we will be launching two new songs from our upcoming album. The fans will get a show and a preview of what Big Nuz is bringing in the new year.”

He added: “When we performed last year, the show was just about Big Nuz, but this year there will be surprise appearances by people such as Tira and that will give the fans their money’s worth. Among the unreleased songs we will be performing at the show is the song Newlands West.

Lindelani Ngema, promotions manager at Ukhozi FM, promised fans a day of great music. “On Sunday, it will be a great concert and the people coming to the show should expect to see the musicians on the day giving it their very best.”

Terry Strachan, the general manager of the Royal Agricultural Society, said logistically, they are ready for the event and that organisers do not anticipate any problems with security or with parking.

“There are not many people who use their own transport and therefore there should be more than enough space available,” he said.