The journey of grief ends

EVEN if we did not admit it, we had all been waiting... 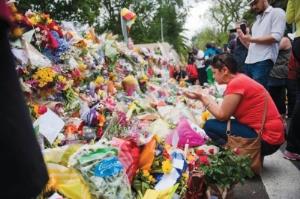 EVEN if we did not admit it, we had all been waiting. Waiting for the moment. The moment Madiba died.

For months that repetitive mantra “critical, but stable” had become part of the system noise of our busy lives.

In the middle of last week it came to the foreground when Mandela’s daughter, Makaziwe Mandela, spoke in public: “On his deathbed he is teaching us lessons — lessons in patience, in love, lessons of tolerance.”

That word “deathbed” put us back on alert. The next day word went round: “Mandela is not responding to antibiotics”. For someone aged 95 it could only mean the end was near.

Nelson Mandela, the first president of a fully democratic South Africa, died at 8.50 pm on Thursday evening in his Houghton home. Since then, his relatives, together with the people of South Africa and, indeed, the rest of the world, have been accompanying him on a 10- day journey that ends tomorrow at a grave in the village of Qunu, in the Eastern Cape.

The news of Mandela’s death, announced officially at 11.45 pm, went round the world. In London at the Odeon cinema in Leicester Square an audience thatincluded Prince William and Catherine, Duchess of Cambridge, was watching the European premiere of Mandela: Long Walk to Freedom. The film’s producer, Durban’s Anant Singh, was told of Mandela’s death as the film neared its end.

Singh consulted with members of Mandela’s family who were present: “We must let it play on, it is what he would have wanted.”

When the film ended Singh had to tamp down a standing ovation. “I then made the announcement that Madiba had died. There was a silence and then people began crying. It was hugely emotional.”

The emotion spread around the world. In South Africa people spontaneously gathered at spots associated with Mandela — outside his Houghton home, placing flowers on Mandela Square in Sandton, at the capture site near Howick and at Inanda where Mandela had voted in 1994. Individuals created tribute sites where people could light candles, lay wreaths and cards.

Sunday was declared a day of national mourning. President Jacob Zuma urged people to attend services in churches, temples and mosques, or to pray and reflect at home. But here some of the ambiguities and ambivalences of the 10 days of mourning began to make themselves apparent. What exactly is a day of national mourning? Flags stood at half mast, pictures of Mandela suddenly appeared in shopping malls, but the tills continued to ker-ching.

Mandela’s face has been the abiding image of the past week. For 27 years while Mandela was in prison, we did not know what he looked like. There were pictures, but if you were caught with one you were liable to a five-year jail sentence. On his release, Mandela became one of the most photographed and filmed personalities on the planet.

We saw all those images again as television channels endlessly recycled pre-prepped tributes and documentaries. There was Mandela the statesman with politicians, pop stars, actors and actresses, supermodels and struggle heroes. There was Archbishop Desmond Tutu, advocate George Bizos, and others who we have got used to seeing in their old age, who suddenly became young and strident again.

In some respects, it was all an anti-climax. Just as Mandela’s death had been long expected, he has also been memorialised long before his final moment with various institutions, such as the Nelson Mandela Foundation and the Mandela Centre of Memory, set up in his name.

Then there was the rain. Cyril Ramaphosa, master of ceremonies at the memorial service at the FNB stadium (Soccer City) in Soweto, called it a blessing. “In the African tradition, it means the gods are welcoming you and the gates of heaven are open.”

Though a record number of heads and former heads of state attended, the service never seemed to strike the right note. It was half state occasion, half party. Only the immediate family appeared to be in mourning. Even United States President Barack Obama was the subject of a “selfie”. He also arrived late, though fortunately in time to deliver a stirring eulogy that saved the day.

And it needed saving. President Zuma was booed, the crowd were frequently inattentive, while many took an early exit, leaving an increasingly embarrassing bloom of bright orange plastic seats.

Later, we learnt that the sign language interpreter was translating gibberish and had a history of violence.

According to some, Mandela’s death has given Zuma a breathing space, allowing him to sidestep the rising furore around his Nkandla homestead. But the focus on Mandela is a double-edged sword, casting the shortcomings of his successors into sharp relief as Mandela’s vision for the future is repeatedly promulgated on radio and television.

On Wednesday, the first day of Mandela’s lying in state at the Union Buildings in Pretoria, the national mood darkened. As Mandela lay in his coffin wearing a hallmark black-and-gold Madiba shirt, celebration finally turned to mourning. Ordinary South Africans travelled from all corners of the country to pay their last respects. Snaking queues under a hot sun echoed those of the first democratic election in 1994.

Today, Mandela’s body will be flown to Mthatha on an SA Airforce C130 aircraft accompanied by relatives and old friends, including Andrew Mlangeni, Ahmed Kathrada and Dennis Goldberg, who stood alongside Mandela in the Rivonia trial.

From Mthatha the body will travel to Mandela’s childhood home of Qunu, “situated in a narrow, grassy valley criss-crossed by clear streams, and overlooked by green hills”, as described by Mandela in his autobiography Long Walk to Freedom. There he will be buried according to Xhosa traditional rites and with the honours due a royal member of the abaThembu clan.

Ten days of national mourning will be over. On Monday, when we wake up, it will be the Day of Reconciliation.