The Ryan Giggs story is not without its controversy, but he will always be remembered for his contribution to football

IT is a rare enough thing finding a professional footballer who commits his entire career to one club, and even rarer when that career lasts longer than two decades... 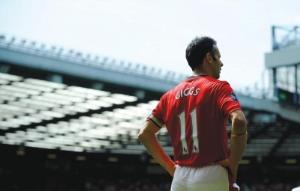 IT is a rare enough thing finding a professional footballer who commits his entire career to one club, and even rarer when that career lasts longer than two decades.

Ryan Giggs turned 40 yesterday, just two days after playing 90 minutes in a Champions League clash at Bayer Leverkusen in what is his 23rd year as a Manchester United first team player. What is most astonishing is that he remains effective, as was demonstrated by his killer assist to Nani in the closing stages of United’s 5-0 walloping of the Germans. He has obviously lost a yard of pace — only a yard — but his skill, vision, accuracy, composure and experience all make him an invaluable member of David Moyes’s squad during a crucial time for United.

For many of us 20-somethings, a United squad without Giggs has simply never existed. When he goes (retires, not dies, though at this stage it’s anyone’s guess which will come first) his loss to football and the Premier League will be the equivalent of cricket and India saying goodbye to Sachin Tendulkar.

He has won all there is to win at club level. His Welsh blood immediately pre-determined that his international honours would forever be non-existent — yet still Giggs finds a way to come back year after year, hungrier than ever and in immaculate condition.

No decisions have been made on next year yet, the season isn’t even half way through, but Giggs has always said that as long as he is in good shape and contributing to the team, he will keep playing. And on Wednesday night’s evidence, there seems to be a bit of gas left in the tank.

Giggs has long been praised for his meticulous work ethic and professionalism, but his legacy is not without its fair share of controversy.

A series of alleged affairs — including one with his brother’s wife — have been well documented. But what is quite remarkable is how quickly the excitement surrounding the story, which was mass­ive at the time, subsided into virtual obscurity. Tiger Woods, Lance Armstrong and Hansie Cronje are all examples of how angry sports fans can get when those at the top of their games err. When it comes to sport, we never forget and seldom do we forgive, and all three of the above-mentioned names, among others, were crucified in the media and by the public for their wrongdoings. Not Giggsy.

I am in no way condoning extra-marital shenanigans, but it is testament to the man’s ability and longevity that his contribution to football has always remained his most documented distinction. Woods will be remembered as a sex addict, Armstrong a doper and Hansie as a match fixer. But Giggs will be remembered as the man who defied age and played for Manchester United as one of the greatest yet.

He has indicated his desire to coach after playing, and is already part of the United backroom staff and well on his way to completing his Uefa badges.

When he does eventually hang up his boots and venture into management, there is surely only one club for him. Anywhere else would just seem wrong.