NEW Maritzburg United coach Ernst Middendorp has revealed the frustrations that led to his sacking at the club a little over nine months ago... 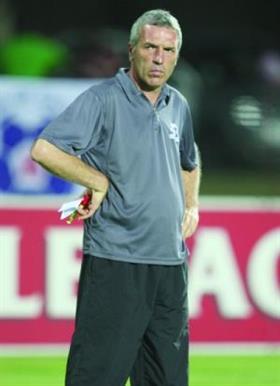 NEW Maritzburg United coach Ernst Middendorp has revealed the frustrations that led to his sacking at the club a little over nine months ago.

In March of last year, Middendorp publicly asked for the club to fire him during a television interview after a 2-2 draw against Vasco da Gama put United in further danger of relegation. There were also reports that emerged after his sacking that he had sought legal action against the club, claiming that he was dismissed unfairly.

“There was never any decision made to go to court,” Middendorp told the Weekend Witness yesterday. “It was a frustrating time where we had a string of results where we should have won and didn’t. The decision was made, the contract was terminated and that was the end of it.”

Middendorp added that the professionalism shown by both him and the club last March made the decision to return now an easy one.

“We dealt with that situation professionally which always gives you the opportunity to meet again,” he said.

Though he never thought about returning to Maritzburg during his time away from the club, the coach said that it is not unusual for managers to return to previous clubs in footballing circles. He has had three stints at German club Arminia Bielefeld.

He took the reins at Durban’s Golden Arrows, where he lasted eight months. He described his time there as “difficult.”

“We worked hard with limited resources and gave the players a preparation that was different to what they had before,” he said. “In the end the decision was made and there is nothing more to say.”

Middendorp takes over from Ian Palmer, who guided United to safety last season after Middendorp’s departure and to seven games undefeated at the start of this season.

While acknowledging that Palmer had done good work at United, Middendorp said that he didn’t see too many differences in tactical mindsets between himself and Palmer.

“For me, we focus on quick transitions when moving forward on the pitch, staying compact as a unit and ball possession,” he said. “This is what I saw in the Swallows game [Palmer’s last match in charge at United].”

Middendorp said that he expects his current group of players to accept individual responsibility on the field.

With United battling in front of goal during the second quarter of the season, the new coach said that he would not be pushing any panic buttons by venturing into the transfer market in an attempt to bolster his attack.

“I trust the current squad of players. Players like Prince [Olomu] and Kurt [Lentjies]; we can expect more from them,” he said. “Buying one player does not solve all of your problems. We do everything together as a team.”

The 7-0 thrashing that United received at the hands of SuperSport United in October is the reason for the goal drought that the side experienced, according to Middendorp.

“After a defeat like that the mindset changes and defence becomes the priority,” he said. “It is normal for this to happen in football.”

A top eight finish is still the aim for United, who are currently in 11th place on the log four points behind eighth place.

“It is good to have targets and this is a realistic goal so let us follow it up and see,” Middendorp said.

United have secured the services of Zimbabwean striker Cuthbert Malajila, who turned down a contract offer from the club during Middendorp’s last stint in Pietermaritzburg.

“Cuthbert is a clever player with a good touch in the box, so let us wait and see,” the coach said. “He has been playing regular football over the last six months so this is good.”

Asked about how he felt the fans would respond to his re-appointment, Middendorp was reserved in his judgments.

“Nothing needs to change, I think the fans must just keep supporting their team,” he said. “It is not about the manager, the captain, the striker, the goalkeeper — it is about the team.”

Middendorp has worked with many of the current first team players, with only Michael Morton and Prince Olomu being the notable exceptions.

“The players that are here now were here when I was last here and they have developed as they have gotten more confident,” he said.

Middendorp added that at no stage had he contacted the club following Palmer’s dismissal, and that all negotiations were started by United.