Tough as an old pyramid

EGYPT is one of those destinations that combines a good time with a bit of culture. So my wife Janice went along with the idea of somewhere exotic for our summer holiday, without fully appreciating what she was about to experience.... 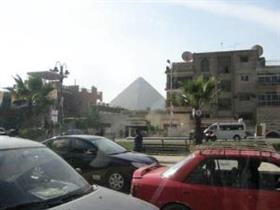 EGYPT is one of those destinations that combines a good time with a bit of culture. So my wife Janice went along with the idea of somewhere exotic for our summer holiday, without fully appreciating what she was about to experience.

We landed in Cairo on December 2, 10 days after the second wave of the Arab Spring — by then early winter — brought civilian protesters into conflict with the army. This was nation-building in progress, growing pains and all, and I confess to a little nostalgia for a good demonstration, after my formative years of marching against nuclear weapons and picketing the South African Embassy in London.

My father-in-law had contacted me days before to ask if we were still serious about going on our trip. I assured him that I had been watching Al Jazeera news regularly, and the demonstrations appeared to be localised around Tahrir Square. Seven days into our upmarket backpacking tour, I related this conversation to our guide, who smiled cynically. When probed, he retorted that Al Jazeera is funded by the state of Qatar, and has its own agenda to play out in the world of Arab League politics.

Our first experience of Cairo was mixed. Mine was learning rapidly how to negotiate across a road between four streams of constantly moving vehicles that were competing for space in three or even two badly demarcated lanes. Janice was immediately drawn to the smells — of spices, roadside food stalls, and bespectacled office workers sitting alongside unemployed youth smoking shishas (water pipes) in the myriad pavement coffee shops. Amid the hubbub of everyday life, the Tahrir Square sit-in was happening just two kilometres across the Nile River. To our disappointment, we were warned against going there alone in case we were mistaken for Israeli spies.

To put the demonstrations in context, there were reportedly 50 000 people in Tahrir Square at peak. Cairo has a population of around 16 million, depending on where you draw the boundaries. Almost every citizen outside the military elite is in favour of change, but the majority of the population is inherently conservative and appeared content to get on with daily life. In saying that, Egypt has had mass uprisings twice before in the last century — in 1919-21 when the Brits were forced to relinquish power, and again in 1952 when the monarchy was booted out. It has been under military rule for the past 60 years.

Cairo is overwhelming, not only in size but density, at 17 200 people per km². By contrast, London has half the population at a density of only 4,800 per km². The entire city comprises high-rise buildings, such that it is dusk in the streets three hours before the sun sets over the River Nile. Being a majority Muslim population, there is no loan finance industry to speak of, and most of the buildings appear half-built. They are constructed and reconstructed incrementally as the owners find themselves in funds. Numerous buildings had no windows (thanks to the low rainfall), most were unplastered, and those that were plastered were generally left unpainted. The tell-tale signs of human occupation were the clothes drying over unfinished balconies and the myriad satellite TV dishes littering the roofs. No dishes, you could be sure the building was still unoccupied. Our hotel only had three functional floors —reception on the ground floor, bedrooms on the 16th floor, and the restaurant on the roof, two floors above the rooms. Everything else was boarded up.

The cars teeming over the streets in multiple directions seem to undergo a similar process of decay and reconstruction. Perhaps it is a legacy of the pharaohs, who believed the human life cycle followed that of the sun — it dies only to rise again the following day. Back-yard mechanics and panel-beaters occupy street corners between the cafés. Everything that is not repairable is recycled.

Except for the rubbish. For 80 years, a minority Coptic Christian community, the Zabaleen, collected refuse door-to-door. According to Wikipedia, they recycled up to 80% of the waste that they collected, aided by donkeys and pigs, whereas most Western companies can only recycle 20% to 25% of the waste that they collect using hi-tech mechanical separation. Over the past decade, the Zabaleen were hit with a double whammy. In 2000, the government introduced a 10-year plan to establish a privatised waste collection service, which has not turned out to be a happy relationship overall. Then in 2009, the Agricultural Ministry ordered the culling of all pigs in April 2009, in response to national fears over the possible spread of swine flu. The result, the Zabaleen are without an income, and the backstreets and even the canal that carries polluted water through the city are full of piles of garbage. It is only thanks to an overactive population of stray cats that eat the organic waste that the city is not teeming with flies.

The resilience of human and beast has seen Egypt through many challenges. I was amazed one evening to see a barn owl flitting from the derelict building next door to our hotel into the sealed 15th floor directly below us. The following morning, a bright green parrot flew out of the same derelict building into open sky. Somehow they manage to survive against considerable odds. The only difference in the human population, which shows similar resilience, is that it can, and did, vote for change.