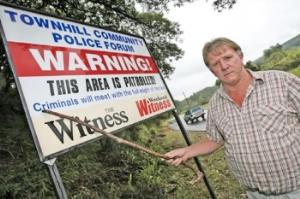 “We can beat crime and the state has given us the tools to do it,” says tough-talking businessman-cum-crimebuster Stuart Knight.

Chairman of the Townhill Community Police Forum (CPF) since 2004, Knight says the key to reducing crime is simple: full-time management. “You can’t let up,” he says. “You have to be on your toes 24 hours a day, seven days a week, 365 days a year.”

Knight’s no-nonsense, eye-on-the-ball approach seems to have found its mark. Figures released by the national ministry of Safety and Security recently show that serious “A” crimes in the Townhill precinct dropped from 1 407 in 2004 to 839 in 2006. Knight says the overall drop in crime is closer to 70%.

Previously havens for drug dealers and criminal syndicates, most of the area’s parks have been reclaimed and a bobbies-on-the-beat patrol system for the precinct, worth R1,5 million a year, is proving its worth. Trust between the area’s 30 000 residents and the police is at an all-time high and Knight describes the Townhill Police Station members as “wide-awake” guys. If you put store by statistics, he reckons Townhill is among the safest places in the world.

Knight devotes five hours of his day to CPF business, all of which is unpaid. He’s “on duty” every weekend, “booking in” at the station every Friday evening and booking off at the weekly CPF meeting on Monday morning. He always carries a firearm which he’s used to protect himself against suspects as well as opportunistic armed muggers.

When Knight attended his first CPF meeting in 2004, about six people turned up, three of whom were policemen. Today, the CPF is a tightly-organised forum, consisting of 21 active sub-forums. A public meeting readily attracts 350 residents.

Knight says he was drawn into community policing in 2004 “out of desperation”.

In 2003, he moved from a smallholding in Thornville, where farm attacks and hijackings were rife, to a house in Northern Park where he hoped to make a fresh start. But there was no escape. Burglaries took place almost every day and there was a brutal attack on a resident in the area’s Moth cottages.

“I reckoned if I didn’t get out there and do something about it, I was going to have to leave,” says Knight, who used to play polo and was looking at polo-mad Argentina as a possible option for emigration.

Then unaware of the Townhill Community Police Forum, Knight took it upon himself to patrol his neighbourhood. He mapped out an area consisting of 51 houses and set off at 9 pm every night — listening and watching — until 3 am.

During those patrols, he began to understand the modus operandi of the criminals and pieced together his theory that crime was being orchestrated by syndicates led by local businessmen.

“You have to start thinking like a criminal,” says Knight, who has earned the title of “master of conspiracies” from some colleagues. “No criminal drives around at night looking for a house to rob. Three to five people will be dropped off, gain access to someone’s garden and move from house to house through the back. That’s why car patrols often pick up nothing.

“These are not always poor and desperate people looking to feed their families,” he says. “They have ratchet bolt cutters, vehicles and top-of-the-range cellphones. In some cases, they carry huge amounts of cash in their back pockets.”

Knight is quick to point out that it isn’t only whites who are affected by crime. “These syndicates are indiscriminate; they target everyone, including police members’ homes.”

When Townhill captain Lawson Naidoo heard about Knight’s night-time patrols, which were skirting dangerously close to vigilantism, he invited Knight to join the CPF. The rest, as they say, is history. Knight had found his niche, a legitimate forum in which to exercise his passion to create a safe environment for the ordinary citizen.

“South Africa has a great future. The structures and laws are in place to achieve a crime-free South Africa. People just have to implement them,” he says, holding up a well-thumbed copy of a manual prepared by community safety and liaison head of department Yasmin Bacus, which sets out accessible guidelines and strategies for CPFs.

The activities of the CPF — what Knight calls an active and equal partnership with shared responsibility between police and the community — are provided for by a range of legislative tools, including the White Paper on Safety and Security and the South African Police Services Act of 1995.

Knight likens the relationship between police and residents to a fledgling “school-governing body situation” in which there’s greater operational transparency and regulation of all crime-fighting activities. Ideally, he’d like to see a similar set-up in the justice system, which currently demands too much time and patience from witnesses who are critical to improving conviction rates.

According to Knight, Townhill police have adopted a no-tolerance approach to all crime. “If you pick up a guy for loitering, urinating in public or for false number plates, it’s often likely he’ll be wanted for a more serious crime somewhere else,” says Knight. “It’s a lesson I learnt from Scotland Yard detective Superintendent Cliff Lyons during his recent working visit to South Africa: you go after the ‘B’ crimes, and the ‘A’ crimes often take care of themselves.”

Knight admits that his hard-nosed approach doesn’t always go down well. He’s been accused of scaring residents with his warnings about crime. “I’m not here to frighten people. I’m here to help them understand the conditions in which they live and make it possible for them to go on with their lives.”

He says it’s important not to underestimate the intelligence of criminals and put too much faith in state-of-the-art security systems sold by people with little material interest in bringing crime levels down. “I know people who have had the Full Monty [complete home security system] installed and who have been totally cleaned out,” he says.

While desperation may have driven him into community policing, Knight is also guided by his belief that the ordinary guy on the street is being short-changed. “I’ve always believed everyone is equal,” he says. “When I see the coverage given to the deaths of people like Lucky Dube and David Rattray, it makes me mad. Every day, 50 people die at the end of a knife or a bullet in South Africa. Because they aren’t famous, they’re not noticed.”

“Whatever sacrifice it takes … I look for no reward,” Knight says when I ask if a life of constant vigilance isn’t too high a price. “If I die, then I die for my community and for the sake of a safe future.”

Who is stuart knight?

A fluent Zulu-speaker, Stuart Knight was “born, brought up and educated” in the rarefied environment of Michaelhouse School in Balgowan, not because his parents had money, but because his father was the school bursar and one-time estate manager, and his mother the school secretary. It was an experience that left him thinking: if your family doesn’t have money, rather not send your child to a top private school.

It was at Michaelhouse that Knight developed a passion for the “rich man’s sport” of polo. Later, he started buying and selling horses to be able to generate enough money to keep a hand in the game and achieved a four-goal handicap. But a riding accident put an end to what he terms his “long and chequered” polo career. Today, he confines his interest to watching Argentinian polo and extreme rodeo on satellite television. More recently, he bought a couple of homing pigeons, which will be sent up to the Free State this winter to compete in a race back home.

From his home, Knight runs a specialised cleaning business. He is married to Jacqui, who is CPF secretary. Both have invested personal time and resources into the rehabilitation of the Chase Valley Park (formerly Hatcheries Park). Last year, they facilitated sponsored day-trips to the park for 2 000 school children from disadvantaged primary schools.