Travels with a shaggy dog

THE first question to an interviewee is not usually: “Are you barking mad?” Okay, it’s rude, but Joanne Lefson has spent nine months travelling round the world with Oscar the dog, smuggling him across borders, hang-gliding with him over Rio, pretending to be blind to get him into aircraft cabins wit... 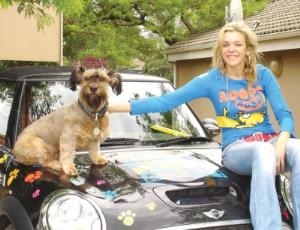 THE first question to an interviewee is not usually: “Are you barking mad?” Okay, it’s rude, but Joanne Lefson has spent nine months travelling round the world with Oscar the dog, smuggling him across borders, hang-gliding with him over Rio, pretending to be blind to get him into aircraft cabins with her and even marrying him in a Las Vegas wedding chapel complete with Elvis lookalike. Is that mad, or not?

Lefson, whose book describing her travels, A Hound the World, has just been published, was in Pietermaritzburg recently on her national tour with Oscar. She took him along to a Friday afternoon session of Funda Nenja, the organisation that works with young dog owners in Mpophomeni outside Howick, teaching them how to handle their dogs, and in return, create that rewarding bond between animal and human. “It’s a great benchmark for people to follow in so much of Africa,” says Lefson. “It’s teaching simple things through a fun process. The organisers, Heather Somerville and Adrienne Olivier, are the kinds of people who inspire us and are worthy of an Oscar.”

As we talk, the dog himself lies next to us, looking smart with a neat haircut — I am not telling a shaggy dog story here. Meeting new dogs and talking to the press are old hat for Oscar, who is a smorgasbord of various things — a bit of German shepherd, a bit of corgi, a bit of this and that, loads of chutzpah and a big helping of the cutes. The last two are important to him on his travels. However, having read the book, his size was a surprise. He is no pocket pooch, and how Lefson managed to hide him in her luggage when they were in smuggling mode is anybody’s guess.

But while Lefson says the best part of their World Woof Tour for her was being young enough and passionate enough to do something she was longing to do, and with her best friend (“and, yes, I do have other, human, friends,” she says), it wasn’t just about fun. There is a serious purpose.

Oscar, like all Lefson’s dogs before him, came from a shelter. Her aim, with the World Woof Tour and the 12- part documentary film that will come out of it and that Animal Planet is considering buying, and her current national tour which is being filmed for a local television special, is to persuade anyone who wants a dog to adopt an abandoned one. “I want to inspire people to give an Oscar a home,” she says. “People have the wrong idea about shelter dogs — one in four is a pedigree dog. There are puppies, old dogs, cute dogs and ugly dogs. It’s like a candy shop: everything is sweet.”

Of course, not all dogs will be Oscar and Lefson knows that not all the dogs she has had could have handled the lawbreaking, adventures and even being labelled a Service Dog to a Mentally Challenged Person — yes, Lefson managed to get the paperwork for that in the United States. With a letter from a psychologist in Cape Town, Oscar could get to places in the U.S. that other dogs can’t go — legally for once. “And that was a little bit truthful,” she says. “He makes me saner on many levels, as all great dogs do. I’ve travelled on my own and got homesick, but not with Oscar. I am like his moving territory; he’s my moving buddy.”

The moving buddy lifted a leg on the Great Wall of China, swam in Rome’s Trevi Fountain — which proved that there is only so far a blonde can push the boundaries in Italy without seriously irritating the police — rode a constipated camel in India and an elephant in Nepal; met Pluto, probably the world’s most famous cartoon dog; chased wild lions in the Masai Mara and raised awareness of the plight of shelter dogs everywhere. Perhaps one day, if Oscar succeeds, all abandoned dogs will be adopted and there will be no need for shelters.

For Lefson, the worst moment was just three days into the trip when Oscar nipped off at Victoria Falls for a swim in the crocodile-infested Zambezi. “I could have so easily lost him. I think I would have committed suicide,” she says. If it was Oscar’s worst moment, or his best, he isn’t saying. But they both lived to tell the tale — and many more besides.

At every shelter Lefson and Oscar visit, Oscar gives an “Oscar” to a dog of his choice — and if Oscar chooses you, you must be quite something. At the Umgeni SPCA in Howick, the Oscar went to Lacey. And whoever adopts her to make her their special companion will receive a supply of Pedigree dog food for six months, and, because Oscar set his paw in the shelter, any dog that is adopted there in the next month will get a month’s supply. He’s working to support his canine cousins and to find them homes.

• A Hound the World: My Travels with Oscar by Joanne Lefson is published by Zebra Press. To follow Oscar’s national tour, and find out more about his Adopt a Dog project, visit www.worldwooftour. com. For more information on Funda Nenja, contact Adrienne Olivier at 083 636 0891 or 033 330 6276.