“NO one deserves to die the way that lady died.”... 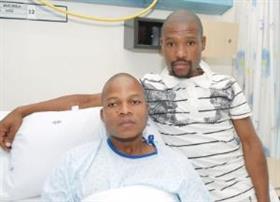 “NO one deserves to die the way that lady died.”

So said Thabiso Motseko, the driver of the runaway truck that caused mayhem at the Liberty Midlands Mall on Monday night, claiming the life of Alice Jogessar (69) of Pietermaritzburg.

Motseko was speaking from his hospital bed yesterday, two days after police broke the news to him about Jogessar. She died instantly when the truck veered off a road parallel to the N3, careered across the mall’s parking lot and crashed through the wall of Absa Bank.

“I remember knocking into trees,” he said.

“I couldn’t see anything and the next thing the truck was full of bricks.”

Motseko said the truck’s clutch failed outside Estcourt and the brakes failed before Pietermaritzburg on a long journey fraught with mechanical problems.

He and his co-driver, Teboho Motoboli, set off from Gauteng on Thursday last week with a load of ironing boards destined for Durban supermarkets.

They first travelled to Bethlehem.

At around noon on Friday, near Harrismith, the truck began to have problems.

“The clutch was stuck. We had to stand on the side and call our boss and she then called the mechanics,” said Motseko.

At 4 pm a mechanic arrived. He managed to drive the truck to a nearby garage and parked it there from Friday afternoon to Sunday, he said.

“The mechanic kept on saying he was coming but stood us up and only arrived Monday morning,” said Motseko.

“We slept in a truck at the garage for those days.”

The mechanic spent all Monday working on the truck, which was finally fixed by 6 pm, he said.

“He then said it was fine. We drove off.”

However, when Motseko and Motoboli were passing Estcourt, the clutch started to screech.

“I kept on driving, driving and driving.”

Then the brakes failed as they approached Pietermaritzburg, passing a stream of heavy vehicles, Motseko recalled.

“The red lights flashed. There were no brakes. No clutch. The handbrake was jammed. I touched the brakes again, and again there was nothing.”

At the same time he changed lanes, trying to make sure that his vehicle didn’t hit any other trucks, he said.

Motseko took the Chatterton Road off-ramp at a high speed, moving on to Sanctuary Road before crashing through a fence into the parking lot.

“The truck was sliding. I said to my assistant, ‘Motoboli, it’s finished’.

“I thought we were going to die because of how the truck was speeding.

“But I kept on holding on to the steering wheel because I was scared of the damage that truck would create if it had lost control.”

He said he didn’t even see Jogessar during the crash.

“It was bad luck. I didn’t mean to kill her,” Motseko said.

“I’m sorry that she passed away.

“I lost control and I didn’t even see her. I feel guilty because I know how precious life is. No one deserves to die the way that lady died.”

He told The Witness he was grateful to be alive; he was not badly hurt and had twisted his neck, leg and right hand.

Both men were discharged yesterday from Netcare St Anne’s Hospital.

Motseko went on: “I think mechanics must make sure that when they do something they do it right.

“He just said the truck was fine and ready.”

“I read the newspaper and people say my foot must have been resting on the accelerator, but that’s not true,” said Motseko.

He said he had not received any counselling.

Co-driver Motoboli, who was in hospital for his 31st birthday on Wednesday, said he did not think they were going to make it alive.

The two said they were glad to be going back home to Johannesburg. They left yesterday afternoon, by bus.

“I just want to rest and go to see my father in Rustenburg,” Motseko added.

Police said they were still continuing their investigation. Once completed the docket would be forwarded to the provincial director of prosecutions for a decision.

Meanwhile, family, colleagues and friends of Jogessar, a former teacher and Child Welfare director, were attending her funeral at the Aryan Hall in Raisethorpe yesterday. Among the mourners was her friend Reen Mohammed, who was the last to see her alive after a girls’ night out at the mall on Monday.

The pair had dinner and then ice-cream, on the eve of Mohammed’s return to Egypt. Instead of returning on Tuesday, she delayed her flight to attend the funeral of her friend.