THERE are still many unanswered questions about the murder of Leigh Matthews, her parents said yesterday after her killer was denied a retrial.... 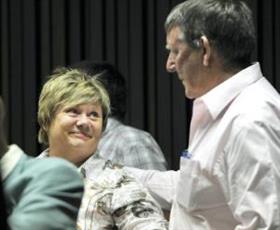 THERE are still many unanswered questions about the murder of Leigh Matthews, her parents said yesterday after her killer was denied a retrial.

“We want to know where she was for those 12 days, but he [Donovan Moodley] will probably never tell us,” mother Sharon Matthews said.

Ruling in the case, Judge Joop Labuschagne said Moodley’s supposed “true story” was “far-fetched and fanciful”, a desperate attempt by a person feeling the pinch of his circumstances.

Moodley originally admitted the kidnapping and murder of Matthews and the extortion of her father, Rob.

He abducted Matthews from Bond University in Sandton on July 9, 2004.

Her body was found dumped in Walkerville south of Johannesburg on July 21.

Moodley alleged that the investigation was doctored so the “true story” would not come out.

This truth, he said, was that three drug dealers forced him to participate in Matthews’s abduction and made him watch as one of them, named only as Jemba, shot her dead.

The judge said he could only find that the story about the three drug dealers was untrue.

He also found that the application for a retrial, coming five years and 348 days after Moodley’s conviction, was years too late.

“In my view [Moodley’s affidavit] was a desperate attempt not to reveal the truth, but to run away from it.”

After the ruling, Moodley kissed his mother, Mary, and walked down down to the holding cells.

Byleveld said afterwards: “The case will always have unanswered questions.”

He is prepared to reopen the investigation at any time should new evidence emerge.

“We might never know all the answers, but one thing is certain. We know who murdered Miss Matthews and we know who the mastermind was,” Van Zyl said.

Asked if he was confident this would be the last time Moodley would try to exonerate himself, he said: “Not confident at all. We expect to see him again.”

Sharon Matthews said they were overjoyed that the police were still investigating, because they still wanted to know what had happened to their daughter between her abduction and the discovery of her dumped body.

There was an indication, not forensically proven, that Matthews’s body was kept in cold storage after her death.

An emotional Rob Matthews added: “There were lots of holes in his story, and justice is a slow process, but we will never give up [our search for the truth].”