THE Durban Bantu Social Centre, like its predecessor and counterpart the Bantu Men’s Social Centre in Johannesburg, was meant to be a social, educational, recreational and entertainment venue for blacks — a place where according to its founding aims “… worthy character may be encouraged and develope... 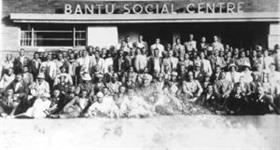 THE Durban Bantu Social Centre, like its predecessor and counterpart the Bantu Men’s Social Centre in Johannesburg, was meant to be a social, educational, recreational and entertainment venue for blacks — a place where according to its founding aims “… worthy character may be encouraged and developed. Bantu men may spend leisure time instead of roaming the streets.”

When the Durban centre was officially opened on October 21, 1933, in Victoria Street (it later moved to Beatrice Street, near the popular American Board Congregational Church), the Natal Mercury proclaimed: “Bantu centre­ opened: native praise of Durban­ venture ‘will reduce the number of skebengas’”.

The newspaper noted that a distinguished gathering of Europeans were present at the opening ceremony, where the mayor of Durban, Percy Osborn, was introduced by the chairperson of the Bantu Social Centre Executive­ Committee, D. G. Shepstone. In his speech, the mayor said: “The need for a club of this sort had long been felt in Durban.” He was followed by Harry Camp Lugg (Gwaza­ AmaZulu), the chief native commissioner for Natal, who spoke in fluent Zulu: “It was desirable that as the native had come into contact with the European a place like the Bantu Social Centre should be created.

“Your original customs are dying away in the towns and it is desirable that some form of recreation should be provided for you when you have finished your work. You may come here instead of roaming the streets. It will, I hope, reduce the number of skebengas. If such places do not exist you may go down into the mud and drag the European with you. We want the native people to rise.”

The next speaker, John L. Dube, a founding member and first president of the ANC, added that “wherever there is identity of interest there must be co-operation”.

The Durban Municipality established a structure to control black people in Durban, built on the revenue generated from the municipal­ beer monopoly. This monopoly generated significant revenue for the municipality­, which, in turn, was used to finance­ the development of the local state apparatus of control. Profits from beer halls made possible the founding in 1916 of a Municipal­ Native Affairs Department.

Before 1933, with the exception of the Lutheran­ Church (Emaplangweni) in Milne Street, the American Board Congregational Church (Ezihlabathini) in Beatrice Street, hostels, beer halls, the Industrial Commercial Workers’ Union Club and the Catholic Thrift Club, there was no place for social activities for black people in the city of Durban. This caused concern among city fathers with regard to how black urban labour was going to be kept occupied and under control, when not at work, in order to avoid political and social unrest. This concern was so serious it gave birth to the idea of the establishment of the Durban Bantu Social Centre.

The centre was established through the efforts of white members of the Rotary Club with the assistance of the Durban Town Council. In 1929, Rotary advised the council to develop native recreation on a structured basis and offered financial assistance both for this and for the appointment of a native welfare officer. At the beginning of 1930, the council formed a native welfare committee to deal solely with issues relating to black South Africans and appointed a native advisory board consisting of four city councillors and 10 black South Africans drawn as representatives from Durban’s political and church organisations as well as the barracks. The city council also appointed a welfare officer whose responsibility included investigating complaints, grievances and organising social entertainments, sports and recreation. Sports and recreation became the main part of the strategy for diffusing unrest.

The Bantu Social Centre was used for committee meetings of the schools’ football clubs, the Durban Bantu Football Association and other football bodies, the Durban and District Cricket Union, the Co-operative Society, the Joint Council of Europeans and Bantu, the committee controlling Ingoma dances, Boxing Club, Natal Native Congress, Pathfinders, Wayfarers, and the Native Temperance Union. The centre also provided an unemployment bureau and evening educational classes. Choral music concerts and Ingoma music concerts were held at the centre. There was also ballroom dancing and films were screened. All these social­ activities contributed to the consolidation of common interest among black people, but this interest did not lead to the social control that white elites had wanted.

According to literary historian Ntongela Masilela, “the social centres were intended equally and simultaneously to control and yet enlighten the African imagination by the powers that be … the genius of H. I. E. Dhlomo, R. R. R. Dhlomo, Jordan Ngubane, B. W.  Vilakazi, Charlotte Manye Maxeke, Bertha Mkhize, Selope Thema, Ruben Caluza and many others was to quickly unravel this great enigma and thereby completely confound the oppressors, who still talked about ‘natives’ and ‘kaffirs’ while these new African­ intellectuals were inventing African nationalism and new African modernity in order­ to overthrow oppression.”

The Durban Bantu Social Centre played a critical role in creating a space for Africans to read and debate the issues of the day. It was also the site of the first public library for black people in Durban, under the charge of Herbert Dhlomo. Dhlomo had been closely associated with the Johannesburg Bantu Men’s Social Centre and he was appointed librarian — organiser under the Transvaal Committee of the Carnegie Library Service for Non-Europeans. The Bantu Men’s Social Centre Library was a receiving depot of the Carnegie Non-European Library.

The centre also became a centre of political activity. In 1939, Dhlomo, Ngubane, Manasseh­ Tebatso (M. T.) Moerane (former president of South Africa, Thabo Mbeki’s maternal­ uncle and editor of The World), Ashby Peter (A. P.) Mda, and other activists established the National Union of African Youth (NUAY), a forerunner to the ANC Youth League which was launched in Durban at the Bantu Social Centre in 1944.

In 1951 another crucial meeting took place at the centre that crafted a new political direction for the ANC. Following a meeting of the young back-room intellectuals of the ANC in Natal such as Dhlomo, Ngubane, and Masabalala Yengwa, Albert Luthuli was elected Natal provincial president of the ANC.

The Durban Bantu Social Centre played a pivotal role in integrating black intelligentsia and black urban labour drawn from the rural areas. This harmonised black social relations, diffused black class tensions, and fostered a much-needed unity against the colonial state and later the apartheid state. Because of the centre’s role in the consolidation of common purpose among black people­, it should go down in history as a place that contributed to the end of oppression in South Africa.

• Mwelela Cele is reading-room librarian at the Campbell Collection, University of KwaZulu-Natal.