ANYTHING other than a victory will not be good enough for Maritzburg United when they head down to the Mother City to take on Ajax Cape Town in their league fixture tomorrow... 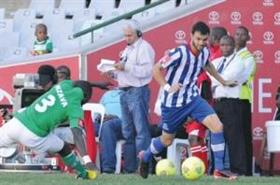 ANYTHING other than a victory will not be good enough for Maritzburg United when they head down to the Mother City to take on Ajax Cape Town in their league fixture tomorrow.

The Team of Choice are in a bad run of three consecutive losses and desperately need three points to turn their season around as they lose ground on the teams in the top half of the table.

The experience of 34-year-old Dillon Sheppard, who has been one of the club’s top performers this season, will come in handy as they try and wrestle the three points from the Urban Warriors who sit one place ahead of United in the league by one point.

“It’s vital for us to pick up the three points and get back amongst the top sides in the league,” the veteran Sheppard told The Witness yesterday.

“The preparation has been going well, and we have worked on a number of things and we hope we can go to Cape Town and come back with the three points,” the former Ajax Cape Town, Dynamo Moscow, Mamelodi Sundowns and Bafana Bafana winger said.

Three points will be important for the club after having lost three in a row, and who are on a run of four games without a victory.

United’s last win came towards the end of October when they defeated AmaZulu at Moses Mabhida Stadium in Durban after a spirited second-half display.

After being in the top half of the table for a while, Clinton Larsen’s lads now find themselves in 10th spot, and just a point ahead of third from bottom University of Pretoria, and two ahead of Golden Arrows who are in 15th. Both clubs have a game in hand on United.

“When you look at the teams around us, if you lose a couple of games, you could find yourself nearer to the bottom of the table, and we have to turn that around,” Sheppard said before once again mentioning the importance of leaving Cape Town with all the points in the bag.

At 34 — almost 35 — Sheppard is currently the second oldest player at the club and after suffering a career-threatening leg break seven years ago when playing for Sundowns, he said the way in which he looked after himself was no secret.

“When I picked up my injury seven years ago, I had to change some habits. I had to change the way I eat, I do yoga and the older you get, you get to know your body a bit more,” he said.

Being one of the seasoned campaigners in the side also allowed him to play a mentorship role with the younger players.

“As an older player, you have to prove that you still deserve to be playing at that level. We also try to help and guide the younger guys in the side.”

United face an Ajax side that is off the back of an impressive 2-1 victory against title chasing SuperSport United, and has also claimed the scalps of champions Kaizer Chiefs. However, they will be reassured that the Urban Warriors are yet to beat a KZN team in two attempts this season.