SOCCER was the winner in the two-day Msunduzi High Schools Confederations Tournament held at the Northdale Stadium on Friday and Saturday under the auspices of the Msunduzi Municipality. ... 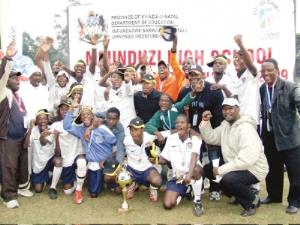 SOCCER was the winner in the two-day Msunduzi High Schools Confederations Tournament held at the Northdale Stadium on Friday and Saturday under the auspices of the Msunduzi Municipality.

Promising football talent, a vibey atmosphere and music from local musicians characterised the two-day tournament. The opening ceremony resembled some openings seen on television where players representing their countries wave their flags in zest and strutt with pride, while the crowd cheers.

Eight high schools from the city were chosen to participate in the tournament and each team had to adopt the name and the soccer jersey of one of the eight countries who will play in the Confederations Cup that starts this weekend.

The two-day soccer extravaganza culminated in a final between Italy and U.S. The match was a drab with both sides failing to translate their combinations and plays in the middle of the park into goals.

The match was eventually forced into penalties and both teams tied 0-0 after extra time. A few plays were admirable from U.S.’s goalkeeper, Xolani Ngcobo, who pulled out impressive saves for his team. Ngcobo’s performance lead his team to victory as he saved two penalties during the penalty shootouts and his team walked away with the R15 000 first prize and gold medals. U.S. won the shootout by 5-3. Ngcobo was also the player of the tournament. Soccer legend and commentator Mike “Sporo” Mangena, who attended both days at the invitation of the municipality, took Ngcobo’s contact details later and said that Ngcobo’s talent could land him in the Bafana Bafana team in the future.

However, the highlight of the day was the match for a third-place finish between Iraq and New Zealand. Iraq dominated their opponents and the final score 4-1 in their favour is testimony to this. Their striker, Khaya Langa, was the top goal scorer of the tournament rattling the net seven times.

Mangena said that some of the players were diamonds in the rough and their talent needs to be nurtured. Deputy municipal manager for community services Zwe Hulane, whose business unit held the tournament on behalf of the municipality, said the tournament’s success exceeded expectations and exposed the talent that the schools have.

He said that next year a bigger tournament will be held ahead of the 2010 Soccer World Cup and will incorporate more schools.