Wildlife: Watchers hope it becomes a KZN icon It seems Ballito’s own “Huberta the Hippo” has wandered off to greener pastures, heading further north and to safety. 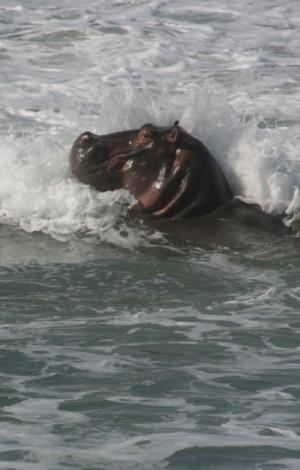 It seems Ballito’s own “Huberta the Hippo” has wandered off to greener pastures, heading further north and to safety.

The appearance of the big animal at Thompson’s Bay this week has been the centre of huge public interest, recalling stories of Huberta, the hippo that travelled hundreds of kilometres from St Lucia to King William’s Town in the late 1920s.

Eastern Cape farmers eventually killed Huberta. Today the story of Huberta is legend in these parts of SA and debate over the future of the north coast hippo, believed to be a young male, is raging.

The hippo was first sighted in the Richards Bay area and then slowly made its way south being seen near Zinkwazi Beach and more recently in Ballito.

“Darting the animal is really not an option because what happens is that afterwards it will head for water and could drown. The only way this method would work is if you have a very strong helicopter and an equally strong net,” said KZN Ezemvelo Wildlife spokesman Jeff Gaisford.

The wildlife conservation authority has decided instead to keep a watchful eye as he makes his way back up the coast opting for quieter waters.

Reacting to these reports, Gaisford said, “We are delighted about this. It seems it might be headed back to Richards Bay where it came from. The more south it heads the more likely that it is heading for disaster because of all the development.”

The huge creature has now been seen between Tinley Manor and the Mvoti River.

He has now started a competition to name the hippo so that it can be turned into an icon for the province.

Suggestions for the name can be e-mailed to him at i_dutton@tiscali.co.za.

Dutton is offering the winner a one-hour coastal flight over the route being followed by the hippo.