WHILE Pietermaritzburg residents flocked to the shelter of the city hall to watch the memorial service of Nelson Mandela yesterday, the rain and chilly weather may have contributed to the fact that the outdoor venue used for the screening was not so well supported... 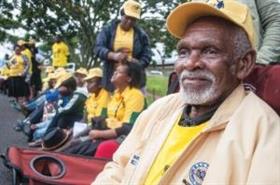 WHILE Pietermaritzburg residents flocked to the shelter of the city hall to watch the memorial service of Nelson Mandela yesterday, the rain and chilly weather may have contributed to the fact that the outdoor venue used for the screening was not so well supported.

Watching the memorial service brought back fond memories to many residents.

At the city hall, Dino Singh said that Madiba’s humility and selflessness was a mark of great character and compassion.

“Watching this memorial service brings back good memories of my meeting Tata in our city [in 1997 when Mandela received the freedom of the city],” he said.

Tinker Fowler said, “It is so great that we can watch proceedings of the memorial service from where Mandela visited and made a speech. Well done, Msunduzi Municipality.”

As quiet and solemn as the occasion was, the crowd cheered as U.S. President Barack Obama whispered words of condolences to Graca Machel after delivering his speech.

In contrast to his reception at the memorial service in Johannesburg, when President Jacob Zuma walked to the podium, the crowd in the capital sang struggle songs with ululation, cheers and whistles.

ANC stalwart Anton Mfenendala Xaba’s granddaughter, Amanda, who watched at Durban University of Technology’s (DUT) Indumiso campus in Imbali, said, “Yet another fallen hero! Well, Mfenendala will be waiting at heaven’s gates to give him his ANC membership.”

A 78-year-old Joseph Dlungwane was in tears as he said that Mandela served his purpose in the struggle and it was now his time to rest. Dlungwane added that there is a time to celebrate and a time to mourn.

Francois van Staden said that had he not known better, he would say that Madiba was Jesus, even though he couldn’t do it all on his own.

Five students from the DUT carried a board with a Bible verse from Job, “Man that is born of a woman is of few days and full of trouble. He cometh forth like a flower, and is cut down: he fleeth also as a shadow, and continueth not. Hamba kahle Tata.”

The turn-out at the outdoor viewing site at Imbali was poor.

Aside from the rain, Pastor David Zibula’s explanation for this was the belief that Mandela was very popular in Pietermaritzburg and families mourn his death like their own.

“African culture taught us that during the mourning period we pray, worship and comfort each other in our private homes. We can only openly celebrate after the burial,” said Zibula.