‘We don’t want him here now’

THE Sharks, in a dramatic about-turn, have washed their hands of Springbok sevens wing Lionel Mapoe.... 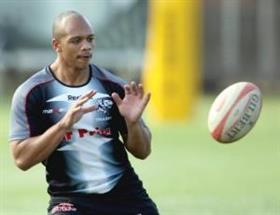 THE Sharks, in a dramatic about-turn, have washed their hands of Springbok sevens wing Lionel Mapoe.

The talented 22-year-old, who refused to play for Free State and signed a contract to play for the Sharks, has now joined the Lions.

Sharks CEO Brian van Zyl told The Witness yesterday that he and coach John Plumtree want nothing more to do with Mapoe, who this week secretly travelled to Johannesburg and, reportedly, signed a contract with the Lions.

A Bloemfontein source said yesterday that the Free State and the Lions have a binding agreement, which will result in Mapoe being available to play for the Johannesburg franchise next season.

The Sharks have been locked in a four-month dispute with Free State over the services of Mapoe, who left Bloemfontein after the Super 14 and settled in Durban.

Mapoe, alleging that he had been grossly underpaid and exploited by Free State, signed a Sharks contract in May, had his salary bumped up and underwent rehabilitation for an injury before joining Plumtree’s squad at practice.

Free State first sought arbitration and then took Mapoe and the Sharks to the Supreme Court to force the wing to return to Bloemfontein and play his rugby for the Cheetahs.

Mapoe refused to return and, backed by the Sharks, he was waiting on a high court appeal when the Lions entered the ring and then did a financial deal with Free State, apparently offering the Cheetahs a transfer fee of R1,2 million.

“Plum and I question the integrity and the morals of the player,” Van Zyl said yesterday. “We have backed him all the way, paying his salary, providing him with rehab and supporting him all the way in his legal battles. We even tried to get him back playing rugby for Paul Treu’s Bok sevens squad.

“He then goes off on his own, without telling his agent, and does his own deal with the Lions. We don’t want him here now.”

Van Zyl said the Sharks would be taking steps to recover salary of R600 000 paid to Mapoe since June, while substantial legal fees were also incurred in fighting Mapoe’s case in the Bloemfontein courts.

Free State, in entering into an agreement with the Lions, have also done an about-turn.

Cheetahs president Harold Verster repeatedly described Mapoe as a “son of Free State rugby” and said they were not interested in being paid a transfer fee for the services of one of their black players. “We want Mapoe back with us,” he said.

But it seems even family members are for sale in Bloemfontein — if the price is right.

Meanwhile, according to a News24 report, Mapoe has apparently been told by the SA Rugby Union not to leave for Singapore with the South African Vipers Sevens team as he will have to join the Springbok tour group in Britain next week.

The Sevens squad left South Africa on Tuesday, but it is believed that attempts are being made to have Mapoe join the Bok squad as soon as possible.

Mapoe has not played any rugby over the past seven months because of injury and his contractual dispute.