Welsh confident that they have the forward power to outmuscle Springboks

THE Welsh believe they have the forward power to succeed where Ireland failed when they face the Springboks in their international at the Millennium Stadium in Cardiff on Saturday.... 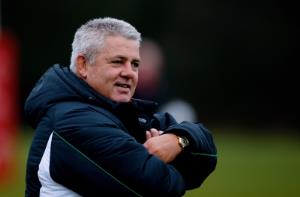 THE Welsh believe they have the forward power to succeed where Ireland failed when they face the Springboks in their international at the Millennium Stadium in Cardiff on Saturday.

The Irish forwards were outmuscled by the Bok pack, but the Welsh have been lifted by their showing against the Wallabies at the weekend when they lost by nine points (25-16).

Welsh coach, New Zealander Warren Gatland, said there was much that was positive to take into the Test against the Boks.

“I thought we scrummaged really well against Australia and the lineout was good, but a couple of costly turnovers made it tough for us.

“We did a pretty good job nullifying the Wallabies at the breakdown and we put them under a lot of pressure at scrum time. We talked about turning our scrum dominance into points, but we didn’t do that. We created a few chances but we didn’t take them.

“In a close game, if we had been a bit more accurate, taken our points and kicked our goals, it could have been a different story.”

Wales will have British Lions fullback Lee Byrne and backrower Ryan Jones back to face the Boks.

“We have to pick it up for South Africa, work hard and make sure that we don’t make those errors again because the Boks are going to be tough and physical.”

Ryan Jones has recovered from a calf injury and Gatland now has backrow options.

“I managed to have a jog on Monday and took part in training,” said Jones. “I haven’t played a lot of rugby for one reason and another, but as you get older that is not always a bad thing. I have been around a while now and I’d like to think I can do a job.”

Jones said that the Boks have to be faced head-on if Wales are to gain their second-ever win over the South Africans.

“They are a world class opposition with some big stars and they are coming here to win,” he said. “We should never be underdogs at home and we have to be brave and be bold and take some confidence from last week’s performance.

“They have an abundance of players and their back-row has been one of the best for years, whatever combination they have had.

“They always have three big athletes and they will be confrontational as any South African side normally is.”

Forward coach Robin McBryde is convinced Wales can expose the Boks at the scrum, particularly after their success in that area against Australia. He said that the Welsh front-row of Adam Jones, Matthew Rees and Gethin Jenkins dominated the Boks during the British Lions series.

“We are blessed with a front row that played against South Africa for the Lions last summer, and we are all aware of the outcome then,” said McBryde.

“And as a front five, I think we are gelling together. We can match anyone physically, that’s where the biggest challenge will be. We always aim to dominate up front, that’s what we’re trying to achieve, having the scrum as a weapon.

“Out of the three big southern hemisphere teams, perhaps the Springboks are the ones who have adapted slowest to the new interpretations of the law and the way the game has gone.

“There are different strengths and weaknesses with every team. We adapted against Australia, but South Africa pose different threats. It is much more of a physical, direct threat. We’ve got to tailor our approach in attack and defence to match South Africa.

“I am sure they will have worked very hard behind the scenes to make up the ground lost, in the eyes of some, on New Zealand and Australia, and they will be looking to adapt their game likewise. They looked pretty comfortable in the win over Ireland.”

The Boks have an excellent record against Wales. The Springboks were unbeaten in 12 consecutive Tests between 1906 and 1998 with 11 wins and one draw (in 1970).

The Springboks’ only loss against Wales came in 1999 when Gary Teichmann’s team lost 29-19 in the first Test match at the new Millennium Stadium. South Africa have won 11 consecutive Tests against Wales since 1999.

Saturday’s Test kicks off at 4.30 pm and New Zealand referee Steve Walsh, now living in Australia, will handle the game.