COACH Heyneke Meyer is a humble fellow, but even he had that warm contented glow after the Springboks finished a marathon season with a sprint to beat the French in Paris last Saturday night... 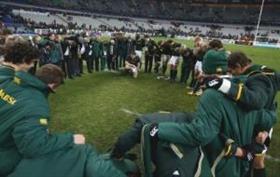 COACH Heyneke Meyer is a humble fellow, but even he had that warm contented glow after the Springboks finished a marathon season with a sprint to beat the French in Paris last Saturday night.

The South Africans have been at the frontline for 10 months, starting with the weekly hand-to-hand combat of Super Rugby followed by a flurry of internationals and then the Currie Cup before returning to muddy foreign trenches to face fresh European opposition.

Yet they have come up roses, winning 13 of their last 15 Tests in the past year. The two losses were against the All Blacks, who have beaten everyone else on the planet.

The Springboks will not be satisfied until they have also overcome their traditional rivals, but they made significant advances during this year’s long campaign with Meyer rewarded for brave selections and astute planning.

The All Blacks, labelled “The Unbeatables” after their remarkable sequence of victories, remain the benchmark. But the New Zealand Herald conceded this week that the All Blacks are “not as far ahead of their challengers as it appears” after they were rattled in all three Tests (against France, England and Ireland) on their European tour. They squeaked home at the death against Ireland, “a perfect season clinched with an imperfect performance”.

And with the 2015 Rugby World Cup taking place in the UK, conditions will suit the power rugby of the Springboks rather than the high tempo game of the All Blacks. The shortage of pace in the burly Bok backrow will not be as obvious in the heavy going.

The Springboks were fairly comfortable and decisive winners against Six Nations champions Wales, Scotland and France, scoring eight tries and conceding only one.

A feature of their final outing of the long year, the 19-10 win in Paris, was their intensity and their fierce commitment on defence. While the All Blacks were showing real signs of fatigue on their tour, bruised Springboks were still queueing up to make massive hits, and that is a tribute to Meyer and the desire in his squad.

Meyer, both tactically and in terms of selection, made very few errors and in most cases proved his critics wrong.

He still tapped into the traditional strengths of South African rugby with the Springboks placing opponents under pressure with their physicality, aggressive defence and strong kick-and-chase game.

But there were marked improvements in several areas and refinements in others. The introduction of Willie le Roux, first on the wing and then fullback, added a touch of the unpredictable to the Springbok game. No longer can opponents kick deep and sit back. Le Roux, JP Pietersen and Bryan Habana have the potential and pace to threaten on the counter.

Way back in June the Scots gave the Boks a nasty scare in Nelspruit when they dominated the tackle area. But the addition of breakdown expert, Scotsman Richie Gray, to Meyer’s coaching staff has resulted in a weakness becoming a strength. In Duane Vermeulen, Willem Alberts and Francois Louw, the Springboks have the most destructive loose trio in world rugby, but, of course, the constant bashing away on the gainline will lead to injury and Meyer needs to add depth to his backrow talent.

Meyer was also criticised for the selection of the Japan-based Fourie du Preez, but the world-class scrumhalf immediately lifted the team, improved the tactical kicking and instinctively involved backs and forwards in attacking sorties. Meyer will now be hoping that Du Preez steers clear of major injury until 2015 — and the chances of that happening will improve if the former Blue Bull continues his career playing fewer games of less intensity in Japan.

What was less satisfactory was the tug of war between the Japanese clubs and leading Springboks and this disrupted the team.

Ruan Pienaar, a sound all-round player, is Meyer’s second-choice scrumhalf, but he continues to blow hot and cold, occasionally committing basic errors. His tendency to stand up and take his eyes off the ball at the base of a ruck not only provided the French with the opportunity to score their only try on Saturday, but it also slows the Boks’ momentum.

It is unfortunate that Meyer failed in his attempt to persuade the blossoming, French-based Rory Kockott — a prolific goal-kicker — to join the Springboks for the tour. The former Sharks scrumhalf, France’s Top 14 player of the year, becomes eligible to play for Les Bleus next year, but he would have provided Meyer with a specialist goal-kicker and enabled him to select the more balanced Pat Lambie instead of Morné Steyn at flyhalf.

Instead it seems that Meyer is looking to the injury-plagued Johan Goosen, a youngster of prodigious talent and a goal-kicker, to succeed Steyn with Lambie providing cover for both fullback and flyhalf.

Meyer has said that he remains concerned about his number five lock and there has been general surprise at his reluctance to thrust the 21-year-old Pieter-Steph du Toit into the starting line-up.

“The number five lock runs the lineout and people who are not involved do not realise what that entails and what a huge challenge it would be for a youngster like Pieter-Steph,” said Meyer.

He said that a season controlling the Sharks lineout next year would make the difference.

“I have always said I have a plan with Pieter-Steph and you will see it come through next year. He will be fed into the system.”

It all seems hush-hush, but there are suggestions that Meyer is waiting to see whether veteran lock Victor Matfield does indeed have the will to subject his 36-year-old body to the rigours of top-flight rugby after an absence of two years.

Meyer said that his tighthead concerns had eased following the success of first Frans Malherbe and Coenie Oosthuizen on tour.

“I was worried when Jannie du Plessis wasn’t available to tour, but suddenly we have three good players at tighthead and we are well covered there.”

The Springboks still lack depth on the wing and at open side flank where there is no obvious back-up for Louw. Meyer has a couple of young centres (Jan Serfontein and JJ Engelbrecht) just off stage while, of course, the Sharks’ influential Frans Steyn, over his knee surgery, is certain to be involved next year.

But the most positive feature of 2013 is that the Springbok are under the command of a general (Meyer) and a captain (Jean de Villiers) who know where they are going and how they are going to get there.

And, on the evidence of the fight they showed in Cardiff, Edinburgh and Paris, the troops are united behind them.