“I’m not crazy. It was either my life or the snake’s. What could I do?” 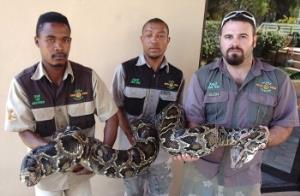 “I’m not crazy. It was either my life or the snake’s. What could I do?”

Petite Lourensa Odendaal, who was almost eaten alive by her husband’s pet Burmese python last Wednesday, told Weekend Witness yesterday that she could still see the snake coming straight for her, mouth open. It grabbed her arm just above her hand and then wound its tail around her legs. She stabbed it 10 times with a kitchen knife and then “got desperate” and began cutting off its tail. Finally, the snake let go.

Odendaal, of Palm Beach along the south coast, said she had been left to care for her husband’s python while he was away for a long period.

The snake, cooped up in a tiny cage, had not been fed “for a while”. Frightened because she was alone, she picked up a kitchen knife and headed for the outside chicken coup to catch a chicken to feed the snake. “I don’t know what happened. It was so sudden. I opened the cage and took out the bucket to give her water, turned around and she was there. The (live) chicken was not even in my hand.”

According to Odendaal, the couple acquired the Burmese python as a pet a year ago. Even then it was large at four metres. It now measures more than five. She said the snake was very tame, had been “a nice pet” and is “very beautiful”. She was let out of her cage every Saturday and swam in the nearby stream before basking in the sun on the lawn.

The extremely traumatised Odendaal screamed for help. Friends arrived shortly afterwards and rushed her to hospital. When she returned home, she said she located the snake, which was now under the house, and called the police. She said the power then went off and she ended up sitting there watching it so that it did not escape by candlelight.

Cassie du Plessis, the snake catcher who was eventually called in to capture the badly wounded snake, gave it one look and called for help. “I have been handling snakes for 30 years. This is a very, very large snake. I have caught huge snakes and this is the first time I have ever had to ask someone for help. You would need at least three people to handle a snake of that size safely.

“There are many snakes that can be kept as pets. This is not one of them. In fact, there are even poisonous snakes that I would prefer to have as a pet.”

Du Plessis said that the snake was not at fault. It was “in the blue”, which meant it was shedding its skin, practically blind, itching all over and extremely aggressive. He said the huge snake could have easily eaten a woman of Odendaal’s size, but this one would never have as snakes do not eat while shedding.

“This snake is not a man-eater. It simply reacted. The snake is not at fault. The owner was irresponsible and his wife did not have enough knowledge or experience to handle it.”

Terence Whittle, owner of the Pure Venom Reptile Park where the snake is being kept, said it had been touch and go, but it looked as if the python would pull through. She has been given antibiotics and the wound at the end of her tail has been stitched closed. However, she probably wouldn’t get back to her “former glory”.

Odendaal said she didn’t want the snake back. “I’m very lucky to be alive. I’m scared of snakes now. I don’t want her back because I can’t control her on my own.”