PLAY finally started at 1 pm on the second day of the Sunfoil Four-Day Series match between the Dolphins and Knights at Pietermaritzburg Oval yesterday, the Dolphins finishing on 206-3 from the maximum 55 overs scheduled, thanks to an unbroken fourth wicket partnership of 134 between Khaya Zondo (77*) and Cody Chetty (65*)... 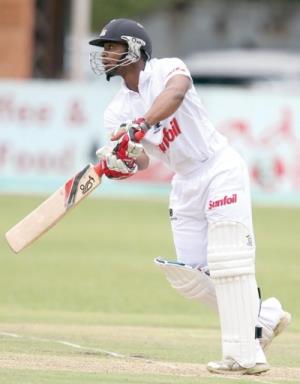 PLAY finally started at 1 pm on the second day of the Sunfoil Four-Day Series match between the Dolphins and Knights at Pietermaritzburg Oval yesterday, the Dolphins finishing on 206-3 from the maximum 55 overs scheduled, thanks to an unbroken fourth wicket partnership of 134 between Khaya Zondo (77*) and Cody Chetty (65*).

Day one was completely washed out and although yesterday dawned overcast with heavy clouds, the rain abated, allowing umpires to remove the covers and let the wicket breathe. No play was possible in the morning as the wicket needed some sun to dry the moisture from being under the covers for so long and it took a while for the sun to eventually make an appearance.

When the sun did break through, the Oval enjoyed a magnificent afternoon bathed in warmth as the Dolphins batsmen went about their business. Knights skipper Johan van der Wath won an important toss and had no hesitation in bowling on a green wicket, as he looked for early wickets. An indication of what was expected from the wicket was seen in the Dolphins selection as spinners Keshav Maharaj and Prenelan Subrayen were left out for the pace of Mthokozisi Shezi and Craig Alexander.

Imraan Khan (28) and Divan van Wyk (26) got off to a lively start, putting on 42 for the first wicket in 8.2 overs before right-arm medium pacer Corné Dry struck with two quick wickets, having Van Wyk and Van Jaarsveld (0) caught at the wicket. This left the Dolphins on 72-3, but normality was restored as two of the Dolphins’ younger batsmen dug in. Both looked in good touch, Chetty stroking a series of boundaries through mid-off and Zondo playing his usual attacking game.

Van der Wath began ringing the changes, introducing spinners Werner Coetsee in the 30th over and Dean Elgar in the 37th. By then, the pitch was playing true and the Dolphins pair looked comfortable against anything that came their way. Zondo bought up his fifty in the 41st over from 94 balls, with seven boundaries and Chetty reached his in the 45th over from 81 balls, with nine fours.

Zondo and Chetty brought up the 100 partnership in the 48th over, keeping the scoring rate at a healthy 3.7 to the over. Having lost a day-and-a-half to the weather, the Dolphins need to score and take wickets quickly if any result is to be gleaned from the game. Batting first, they need to set the tone and look on course to set a decent first innings score before letting their four-pronged pace attack loose.

Play is scheduled to start at 9am today.

K Zondo not out77

C Chetty not out65