Young cricketer and friend killed, another critical after N3 collision

ROMANO Faro (18) from Northdale had just finished his matric and was looking forward to a career in professional cricket... 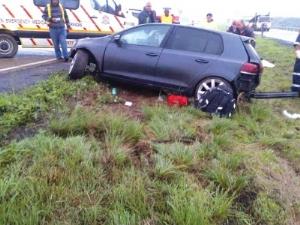 ROMANO Faro (18) from Northdale had just finished his matric and was looking forward to a career in professional cricket.

But in the early hours of Saturday morning, a dream was shattered when he died in a car accident on the N3 near Midmar.

Faro died on the spot along with his friend Jerome David (23), who was working at Hannah Ford Wheels in Umhlanga.

Another friend travelling with them in the VW Golf 6 GTi, is still in a critical condition in Northdale Hospital. His name has not been released yet.

A friend of Faro, who did not want to be named, said, “Just last weekend we took him to his matric ball after he finished his matric at Woodlands High School.”

He said his friend had so much to live for and was a very gifted young cricketer.

“I have known him all my life and we were shocked to learn that he had been involved in an accident.

“As soon as we were told we rushed to the scene but it had been all cleared up when we got there.”

He said a mortuary staff member told them that Faro suffered a severe head injury.

“This was a terrible way to die for someone who was a responsible young man who did not even drink alcohol because he was so focused in life,” the friend added.

A friend, who had known David for more than four years, said he was fondly known as “Loco”.

“He got along with everyone who loves motoring because he was into cars,” he said. “We could not believe the news because he was like a brother to us. We are going to miss his personality most, because Jerome had a spontaneous personality.”

Howick police spokesperson Captain Lolly Moodley said three young men were travelling south on the N3 highway near the Midmar and Tweedie off ramp when the driver is believed to have lost control of the vehicle. He veered over the median and drove onto oncoming traffic.

Moodley said the car collided with a truck and another vehicle. “Howick police are investigating a case of culpable homicide as well as circumstances around the accident,” he said.