“IT’S our way of informing young people in a language that they understand … music,” said spoken-word poet Ntsiki Mazwai, one of the main acts at the first annual Youth Shakedown held at the Winston Churchill Theatre in Pietermaritzburg.... 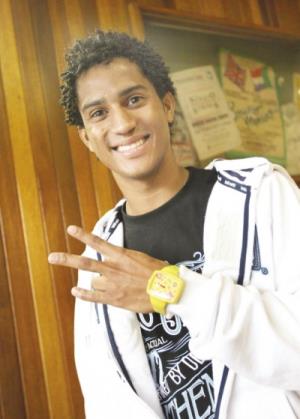 “IT’S our way of informing young people in a language that they understand … music,” said spoken-word poet Ntsiki Mazwai, one of the main acts at the first annual Youth Shakedown held at the Winston Churchill Theatre in Pietermaritzburg.

“The idea is to not only celebrate Youth Day, but to create awareness about issues that affect the youth,” said the event co-ordinator, Luniqué.

The theme of this year’s Shakedown was “Youth Scrutiniz’n”. “We partnered with USAID, Scrutinize, the Department of Arts and Culture and a lot of other organisations to really shine some light on HIV and Aids,” Luniqué said.

“It’s an issue that really affects the young people of today. There’re a lot of teenage pregnancies and HIV is spreading … We get the youth to condomise and be more careful,” he added.

The event was more than just a concert. Talks about HIV were given between acts by partnering organisations and HIV testing stations were set up outside for anyone who wanted to find out their status.

Local lad Mario, who has gained a lot of airplay on radio stations countrywide, said that although the main aim of the day was working toward achieving “an HIV-free generation”, it was also about educating young people about a life that was better than the one they know.

“We’re showing them that there is another alternative to going into crime, for example,” he said. “We’re showing them that times have changed. It’s not like it was 30 years ago. You can walk around freely. You can come to a function like this and sit next to an Indian person or a white person. It’s about being young in SA in 2009. Forget the past: we need to look ahead. You can do anything you want to.”

Mario said he was amazed to see how the audience responded to some of the artists on stage.

“Wow! I expected 300 people who just came for the free T-shirt,” he said jokingly. “But they showed up in masses, excited and very responsive. I mean, not only to the dancers crumping but to poetry also. I didn’t expect it. It was amazing.”

Mazwai, who sported army-print pants in commemoration of the young people who died in Soweto 33 years ago, gave the audience a sneak-preview of Defiance Campaign, the first single and title track of her forthcoming album.

Before going onstage, she told The Witness it is important for the youth to remember what the day actually signifies. “Some see it as just another public holiday. I’m here to remind them about the struggles that were fought for their rights.”