THE Vulindlela based community organisation Umbimbi Lwewinsizwa, which was in the forefront of organising the traditional “cleansing” ceremony held at KwaMafunze yesterday, was showered with praise by both president Jacob Zuma and Zulu King Goodwill Zwelithini for organising this important Zulu ritu... 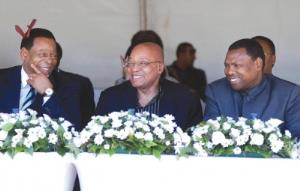 THE Vulindlela based community organisation Umbimbi Lwewinsizwa, which was in the forefront of organising the traditional “cleansing” ceremony held at KwaMafunze yesterday, was showered with praise by both president Jacob Zuma and Zulu King Goodwill Zwelithini for organising this important Zulu ritual to cement peace in the area.

Thousands of people attended this two-day ceremony which saw traditional amabutho (warriors) officially declaring the cessation of hostilities among the people of Vulindlela, who were engulfed by political violence in the 1980s and 1990s and faction fights in the 1960s.

Thousands of people died in the area during the political violence between the supporters of the IFP and the ANC.

The ceremony was held to afford locals an opportunity to heal the wounds of the violent past and to declare peace among those who died during the internecine political violence and faction fights.

Before the King and Zuma delivered their speeches, KZN premier Zweli Mkhize, who was also instrumental in organising the ceremony, called the names of all the leaders of Umbimbi, who had been drawn from different areas of Vulindlela.

In his address Zuma described the event as a heroic deed that “will play an important role in maintaining the integrity of the nation.”

“It is now common that after the war, people who had been involved in the fighting just rejoin the community without cleansing themselves from the blood spilt during the war. This creates serious problems for the community and the nation at large.

“Consequently violence erupts now and again because there was no official laying down of arms accompanied by cleansing of intelezi yempi (traditional war medicine). It was heroic for Umbimbi to come up with this idea. It’s no shame or cowardice to properly resolve the war with such a ceremony.” Zuma said.

Zuma said the dawn of peace in the area will encourage development in the area and thanked the amakhosi from six Vulindlela areas who were part of organising this ritual.

His Majesty the King emphasised that the chapter of war has ended in Pietermaritzburg and praised amabutho for promoting reconciliation. He encouraged the locals to now start concentrating on agriculture to fight poverty.

Inkosi Nsikayezwe Zondi who welcomed the guests refuted reports that the ceremony was politically motivated.

“We wanted the King to come here and declare that there would be no more bloodshed in this area. There are some who stopped people from coming to this ceremony. Who are they to stop the people from going to meet their King because people belong to His Majesty,” Zondi said.

In an attempt to encourage development in the area and to push back the frontiers of poverty, the KZN Agriculture Department donated 15 tractors which are going to be used by the locals to cultivate fields.