Shocking video footage has emerged of a heated confrontation between a woman and a panga-wielding ­Pietermaritzburg man. 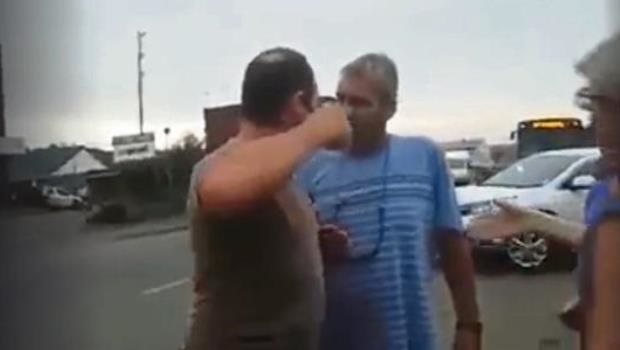 The woman’s 16-year-old daughter ­recorded the ordeal and the video went viral on social media, with more than 40 000 views in less than a week.

However, Taz Konthomina, of Cafe Carwash, yesterday slammed reports that he had assaulted the woman’s daughter when he tried to stop the ­recording, saying that his actions were justified after the woman made racist ­remarks to his staff.

According to the woman, who asked not to be named, she had taken her car to the carwash last Thursday.

“When I went to fetch the car I saw that there were two circular stains that looked like coffee stains on the bonnet,” she said.

“I said my car was not like this when it came in. My daughter who was with me was pointing out the dirty marks on the car to the staff while Konthomina’s wife continued to disagree with me.

“I kept saying, ‘I can’t believe you let a car leave your premises dirtier than it arrived’. She walked away and then her husband arrived on his motor bike.”

She said he told staff to clean the marks off and walked away, only to return a few minutes later “shouting and screaming”.

She said he swore at her in front of her two daughters, who are 16 and 12, leaving the 12-year-old in tears.

Konthomina said he was angry that the woman had used racial slurs, an accusation the woman said “was ridiculous”.

“Anyone who knows me will tell you I do not speak like that. I do not even swear, especially not in front of my ­children.

“The whole time I was there I spoke to the staff in isiZulu because I learnt the language when I was young. The fact that he is accusing me of racially abusing his staff is ridiculous and untrue,” she said.

She said she had laid charges of assault against Konthomina for striking her daughter in the chest during the ­argument.

Pietermaritzburg swimming coach and Midmar Mile affiliate Wayne Riddin said he came rushing to the woman’s aid when he got a distress call just after 5 pm.

“As I got to the carwash, he ­[Konthomina] was driving off. I shouted after him and he made a U-turn and jumped out of his bakkie with a panga,” Riddin said.

“His action was totally unreasonable. I have never had anyone confront me with a panga. His reaction was not ­normal.”

Speaking to The Witness yesterday, Konthomina said he plans to open a case of crimen injuria against the woman.

Konthomina explained that he was at a meeting when he received a call from his distressed wife, who said he needed to return to the carwash urgently.

“When I got back, I saw a woman standing with her hands folded, ­watching my staff clean her car,” he said.

His cashier said the woman was ­“completely unhappy” and had accused the workers of scratching her vehicle.

“I went to the back to get my bakkie keys to move my bakkie, and one of my staff told me the woman had whispered under her breath to her child that they are all a bunch of useless k******,” ­Konthomina said.

Immediately becoming enraged at the alleged racist remark, he admitted telling the woman to “f*** off”.

“When you say something like that, I have no respect for you. I went to move my bakkie and I saw Riddin chasing behind me, so I stopped and went after him. You saw the rest,” Konthomina said.

The video was shared on Facebook ­pages across the country, including the “Police Pics and Clips” page that has more than 66 000 followers, generating more than 40 000 views.

THE video of Taz Konthomina ­arguing with one of his customers has elicited disgust from the Pietermaritzburg community.

The video, taken outside the Cafe Carwash in Victoria Road, shows Konthomina holding a panga as he shouts loudly at a woman, her 16-year-old ­daughter and Wayne Riddin.

Konthomina then walks ­toward his car and puts the ­panga away before storming up to Riddin and the woman.

He begins hurling insults, swearing violently at the group while Riddin tries to defuse the situation by talking softly and calmly.

Konthomina then raises his fist as if to punch Riddin.

When Riddin asks if he has been drinking, Konthomina­ replies loudly, “Yes I have”.

He begins swearing at the group and then turns toward the daughter holding the camera.

You can hear her scream ­before she drops the camera and it switches off.