Songstress, Nomfundo Ngcobo, popularly known as Nomfundo Moh, was presented with a double platinum plaque shortly after graduating from the University of KwaZulu-Natal (UKZN) on Saturday. 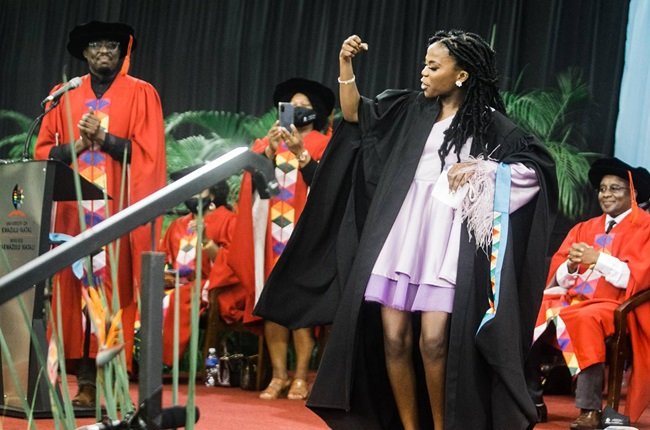 Songstress, Nomfundo Ngcobo, popularly known as Nomfundo Moh, was presented with a double platinum plaque shortly after graduating from the University of KwaZulu-Natal (UKZN) on Saturday.

Her latest hit Soft life was symbolically played as she walked across the stage and danced in celebration as she was conferred with a Bachelor of Social Work degree. The moment was made more special, with members of the audience also singing the lyrics in unison and cheering her on.

Ngcobo’s management team arranged the surprise of awarding her the double platinum plaque for her hit song Phakade Lami, which currently has over 9,5 million views on YouTube and over three million streams on Spotify. Overcome with emotion, Nomfundo Ngcobo, well known Nomfundo Moh knelt in gratitude as she was surprised by her management team with a plaque showcasing that her hit song – Phakade Lami had just gone Double Platinum. Ngcobo received the surprise after stepping off the stage at her graduation ceremony where she received a Bachelor of Social Work degree from the University of KwaZulu-Natal.
Rajesh Jantilal

Ngcobo said she was surprised that her song was on the loud speaker as she stepped onto the graduation stage. She said that was special for her and receiving double platinum was a double blessing.

“The song Phakade Lami went gold two months ago. I wasn’t expecting to go double platinum already. I am so happy,” she said

On receiving her degree, a teary-eyed Ngcobo said she felt emotional, excited and happy, but also sad that her late grandmother was not there to witness her special day. She said she was grateful that her family, including her grandad and mum were there to share in her joy.

Ngcobo said she decided to pursue a career in social work because her main goal in life is to “be there for others”.

She said her music career and studies were not child’s play, but if one focuses and knows what one wants, one will get through. Ngcobo dreams of having her own foundation one day, focused on improving the lives of the youth and keeping them out of trouble.

“I am truly humbled by the love shown to me by my team and fans on the graduation stage. Completing my degree proves that I can achieve whatever I put my mind to. Thank you to everyone who believed in me.”

Ngcobo, who hails from Ndwedwe, in northern KZN, wrote Phakade Lami during the Covid-19 pandemic.

“It’s a very relatable song and I think that is what has made it so successful,” she said.

She said she has always loved music and began singing at the age of six, performing at church, school concerts and at UKZN where she began writing her own songs.

“Music was always my passion. When I realised that people loved my songs, I thought I could actually become a musician and make a career out of it,” she said.

Reflecting on her fondest UKZN memories, she said:

“I recall during my first lecture, we were put into groups and had to introduce ourselves with what we have in common as a group. In my group, we were all Zionists so we sang Ngijulise Nkosi Othandweni Lwakho (Immerse Me in Your Love, oh Lord). My lecturer, Dr Sibonsile Zibane, even nicknamed me iGosa (steward). I quickly became friends with Andiswa, Smangele and Ntokozo on campus. They always had my back. We’d laugh, have fun and study together. It’s so good to graduate alongside them and I’m proud of them.”

Zibane recalled that she easily recognised Ngcobo’s talent from her first day in class.

“I remember she stood out for me. From early on I could see what a leader she was, a quality that will hold her well in her career as a social worker.”

Her message to other students is: “Have dreams and let them drive you to reach greater heights. Ambition resides where there is a dream.”