Sharks fullback Aphelele Fassi said they have been working very diligently in practice sessions as part of their quest to reach stability in the fledgling United Rugby Championship (URC). Sharks fullback Aphelele Fassi said they have been working very diligently in practice sessions as part of their quest to reach stability in the fledgling United Rugby Championship (URC).

Fassi and company visit the Lions on Saturday afternoon for the resumption of the Europe-linked URC, which has been challenging for South African sides so far, while another Sharks combination will open the Currie Cup against Griquas at home this evening.

The nifty player, who turns 24-years-old on Sunday, says the Sharks crew have worked intensely on their mistakes and combinations in training over the past two weeks, despite baking conditions in Durban.

“It has been a tough two weeks being back. We looked at what in the first phase of the URC we wanted focus on — obviously playing overseas was quite difficult. I think the learnings have improved and we just want to get out there and rectify our mistakes and learnings.”

“I think the mood in the camp is to ‘get on the pitch and play’. This type of heat brings you down, but the boys have the energy to come out here each and every day and put in a good training session.

“The mood in camp is very happy, very delighted to have fixtures again.”

Now controlled by American money, the Sharks posted three losses and two wins in their first five URC assignments, to sit fifth from bottom in the 16-team standings ahead of the restart this weekend.

However, amid the trying fixtures in the new competition on foreign soil, there was a Springbok call-up for Fassi to cherish and build on for the future.

He said: “To have guys who played URC and guys with Springbok experience around is good. I am just super-excited to play, to get out there and put in a good performance.

“We know the Lions are full of intensity, but we need to capitalise on the opportunities we receive. If we only get five, it would be good to take four of them.

Meanwhile, former Sharks and Springbok forward Etienne Fynn said he’s chuffed to be leading his home franchise in the Currie Cup this season, but fully understands his future will depend on results achieved.

The 49-year-old coach said that following his men’s good work in training, the big hope is that they will handle whatever Griquas throw at them in today’s 5.45 pm kick-off at Kings Park. He’s also keen to see how some of the young players in the squad grow during the year. 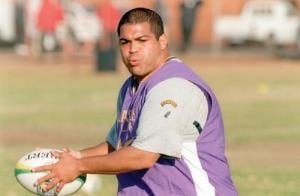 Former Sharks and Bok prop Etienne Fynn is the newest head of the Sharks Academy.
Gallo

“Griquas, whether playing at home or away, are a tough and bruising side, so we have to be ready for them,” he said.

A maximum of 2 000 fully vaccinated and pre-registered spectators are allowed to enter the stadium.

Today also sees Lions versus Pumas at 3 pm and Western Province versus Bulls at 8 pm.

The Lions, Province and Bulls all scored wins in the opening round of the domestic competition at the weekend, while Fynn’s men had a bye.