Surfski paddlers battle it out in Durban double ski title

South Africa’s most decorated paddler Hank McGregor returned to his winning ways when he partnered young rising star Hamish Lovemore to win the national double ski title in stormy weather at the Bay Union King of the Bay in Durban yesterday. 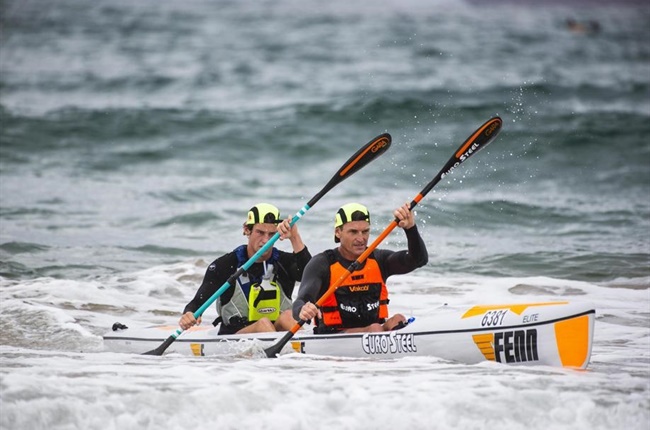 South Africa’s most decorated paddler Hank McGregor returned to his winning ways when he partnered young rising star Hamish Lovemore to win the national double ski title in stormy weather at the Bay Union King of the Bay in Durban on Sunday.

It was the first national title of a year truncated by the Covid-19 lockdown and signalled the start of eight days during which time four national championships will be decided, as the focus shifts to St Francis next weekend for three days of ski and flatwater marathon racing.

McGregor’s win completed a hat-trick of victories in the national double ski title decider, after back-to-back wins with Andy Birkett in 2018 Pete Marlin and the Freedom Paddle in 2019.

With Lovemore confirmed as his partner for the national marathon champs K2 race in St Francis next Monday, the 23 km King of the Bay proved to be an excellent dress rehearsal for the combination of McGregor and Lovemore.

After completing the 11 km flatwater haul across Durban harbour from the start at the Bayhead, McGregor and Lovemore found themselves racing two other double ski crews in Tyron Maher and Gene Prato as well as the Pietermaritzburg duo Brandon van der Walt and Dave Evans.

“It was quite unforgiving out there today and everyone who finished today will know they have done a proper surfski race. It was quite messy out there and you have to pick your own lines and hope for the best and gun it.”
Hank McGregor

Once in the open ocean the two-metre swell whipped up by the northeasterly onshore winds split up the bunches and McGregor and Lovemore ground away to a handsome lead by the time they reached the turn can off the Mngeni River mouth, before cantering home to a comfortable win over second placed Prato and Maher.

“Conditions weren’t ideal,” said McGregor afterwards. “It was quite unforgiving out there today and everyone who finished today will know they have done a proper surfski race. It was quite messy out there and you have to pick your own lines and hope for the best and gun it.

“I felt there was good power from the back of the boat and we enjoyed it and and feel happy to get here first,” he added.

“It was a great paddle, amongst the dolphins out there,” Lovemore added after retaining the title he won at the same race last year when it was a single ski championship event.

For McGregor the notably upbeat mood signalled the end of the lengthy lay-off from mainstream paddling events during lockdown.

“Just lining up at the start today you just got this feeling that we are back. Back after the lockdown and this was the first national title available and we are stoked that we took it,” said McGregor.

Prato and Maher wrapped up second before arguably the most talked about result of the day with veteran surfski ace and lifesaver Matt Boumann and rising star Connor Botha taking third after starting from stone last in A batch after missing their start.

They were ahead of the start line warming up when the seeded batch was set on its way, forcing them to return to the startline as the batch streaked away across the Silt Canal at the start.

The women’s race was thrown on its head just before the start when it was confirmed that former winner Michelle Burn had fallen ill and couldn’t partner teenager Saskia Hockly in what was being billed as the boat to beat.

Hockly was saved by her MacSquad coach Lee McGregor who arranged for Jenna Ward to partner her for what was their first outing in a ski together.

In a carbon copy of the McGregor/Lovemore partnership of youth and experience and with both crews headed for the national K2 marathon championships next week, the outing proved a comfortable win for Ward and Hockly, replicating their excellent showing at the provincial marathon champs at Camps Drift last week.

“Once we got out into the ocean everyone spread out,” said Hockly. “Jen [Ward], being the awesome driver that she is, got us onto some runs, and we felt comfortable coming back.

“I knew that we combine really well, and we have very similar body shapes and size which helps.

“I woke up this morning with completely different intentions, planning a day of reports and marking,” said Ward, a school teacher by profession. Coming away with an SA title with Saskia is probably a better way to spend my Sunday,” she joked.

Kyeta Purchase and young Paige Horne wrapped up second place in the event that decided both the SA S2 and KZN S2 titles for 2020.

The event attracted a huge field of around 250 surfski paddlers in double and single skis and stand-up paddle boards, thriving on the return of popular canoeing events, despite the adverse weather conditions.