Serial killer back in PMB? 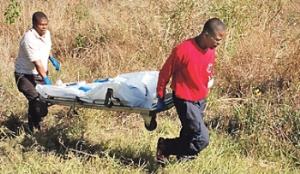 Evidence has come to light that a serial rapist-killer is on the loose in the Pietermaritzburg area, seven years after police closed an investigation into the activities of the so-called “Sleepy Hollow” murderer, who was linked to the deaths of at least 13 women in the late 1990s.

The possibility that the Sleepy Hollow killer might be responsible for at least three more recent murders — and suspected rapes — of unidentified black women in the vicinity of the N3 highway near Pietermaritzburg between February and October last year cannot be discounted, although there are some differences between the latest crime scenes and those of the ’90s.

The Witness is aware of allegations that more bodies said to bear the trademarks of the killer have also been discovered near Bloemfontein and Port Elizabeth.

The Witness has confirmed that a top psychologist attached to the SAPS Investigative Psychology Unit in Pretoria visited Pietermaritzburg in November to assess if a serial murderer is at work.

The murders he was tasked to examine were those of an unidentified young black woman found behind M.L. Sultan school last February, another near Liberty Mall in June last year, and a third body found in October between Hilton and Peter Brown Drive.

The psychologist’s visit to the capital has been confirmed by the head of the unit, Dr Gerard Labuschagne.

Labuschagne did not wish to give details of their findings, but said “certain recommendations” have been made to provincial police authorities, and he was still awaiting a response.

The Witness has information that the expert found it likely that a serial killer is at work and recommended that a dedicated task team be established to investigate the latest killings. To date, no action has been taken.

Further investigations would probably require efforts to locate similar murders that have occurred in recent years, the compilation of a list of missing persons, and the exhumation of the victim’s bodies and facial reconstruction of the skulls for identification purposes.

Director Johan Booysen, head of KwaZulu Natal’s Organised Crime Unit, said at the weekend he had been on leave and was unaware of the new developments.

Concerning the Sleepy Hollow investigation, Booysen said no investigations ever cease completely. “I cannot say whether or not that investigation was in fact closed or not. It is so that sometimes investigations reach a dead end, but if new leads come to light we will continue again.”

During the Sleepy Hollow killer investigation, police exhumed the bodies of seven victims from paupers’ graves in Mountain Rise and Mpophomeni. Their faces were reconstructed from the skulls in a bid to identify the women, yet no photographs were ever released to the media for publication.

The major difference between the Sleepy Hollow murders and the most recent ones is that the 2007 victims were burned beyond recognition.

A major similarity though, is the location of the bodies near the N3 and the fact that the victims were strangled with their panties.

A former investigator trained in the ways of serial killers (who asked to remain anonymous) said the differences between the recent and earlier murder scenes could be explained. He said serial killers have been known to change their modus operandi at times to adapt to prevailing circumstances.

For example, media coverage of the earlier killing spree may have caused the assailant to want to cover his tracks, resulting in the burning of the bodies to make identification more difficult.

“Serial killers are usually highly intelligent and they read newspapers,” the source said. “We knew he would not stop. A serial killer never stops killing.”

The Witness was told that a lack of support and resources such as transport were major stumbling blocks faced by the Sleepy Hollow investigators at the time.

Team members were allegedly not allowed to focus their efforts on the serial killer, but were expected to also carry on with their normal duties during the investigation.

As the team dwindled — for reasons that included resignations and the death of a member in a car crash — management clamped down and resources dried up.

The Sleepy Hollow killer’s 13 known victims were thought to have been sex workers. The bodies were found near the N3 highway between Pietermaritzburg and Bulwer from September 1997 onwards.

The discovery of the body of Nomusa Dlomo at Mkondeni on New Year’s Day 1998 and the manner of her death was what first attracted the attention of detectives trained in the work of serial killers. They began to unearth numerous other similar crimes and a pattern emerged.

Dlomo, Pretty Shelembe (found in May 1998 near the Umkomaas River in Boston/Bulwer) and Adrina Mbokazi (found at Howick in June 1998) were the only three victims who were identified.

The question now hanging over police management is whether the fate of these women was not regarded as sufficiently important to warrant an ongoing inquiry, and if other lives could have been saved had the investigation not been stopped seven years ago.