Why foreigners are bailing out of the JSE

Investors behave as if a credit downgrade has already happened.

Foreigners are disinvesting from the JSE at an ever-increasing rate.

In January, foreign investors offloaded close to R18bn in bonds and equities, signaling their disquiet over the economic prospects for the country.

Foreigners’ enthusiasm for the JSE has been nosediving since 2012, but accelerated in January last year when the rand briefly touched R17 to the US dollar after Nhanhla Nene was dislodged as finance minister. Back then, foreign investors questioned the state of SA’s governance. Not much appears to have changed. Nene was replaced in December 2015 by Pravin Gordhan, who came under attack almost immediately from elements within the ANC for his supposed role in setting up a rogue investigations unit while head of the South African Revenue Services. But the real reason is now becoming clear: just this week, President Zuma reportedly attacked Treasury for standing in the way of economic transformation. In other words, neither Nene nor Gordhan were willing to sign cheques for the president’s more fanciful projects. 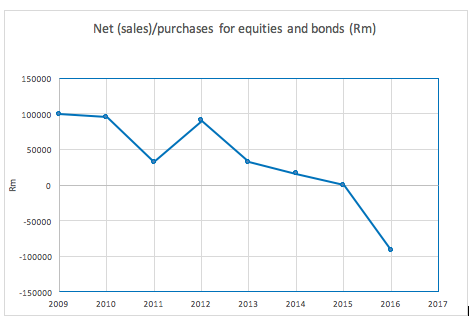 The foreign sell-off on the JSE is consistent with the foreign direct disinvestment by South African-based companies. Last year they used their foreign investment allowances to ship close to R70bn out of the country.

“Foreigners are selling out of corporate South Africa,” says Ian Cruickshanks, chief economist at the Institute of Race Relations. “The reasons are obvious: the ratings agencies have us on negative watch, and we are drifting further away from our budget deficit target. Interest rates will have to go up eventually, particularly if the US rates are increased as expected, and that will make it more difficult for government to borrow.”

The timing of the sell-off could also be in anticipation of an upcoming budget based on exaggerated expectations of economic recovery. Previous budgets have promised massive infrastructure spending as a way to boost growth, little of which has actually materialised. Another motivation for the sell-off is the surprising strength in the rand, which allows foreigners to cash up while the going is good.

David Shapiro, deputy chairman at Sasfin Securities, says the lack of economic growth largely accounts for the sell-off by foreigners. “There are no compelling stories coming out of SA for investors. I struggle to find a good reason why investors should come here. For many investors the threat of a credit downgrade, and the absence of a good reason to invest here, has created conditions where we are already treated as if a credit downgrade has happened. Overseas investors are going into more alluring markets where growth is better and risks are lower.”

What is surprising is how the rand has managed to remain so strong in the face of this sell-off.

Donna Nemer, director of capital markets at the JSE, says overseas investors may be rebalancing their portfolios in anticipation of a possible ratings downgrade. “Foreign investors may have been overweight in SA shares for a long time due to their strong performance, so I suspect there is an element of rebalancing going on. SA still features well relative to other emerging markets. We produced some great global corporate champions here, such as MTN, Steinhoff, Naspers and SABMiller. The financial markets are well-developed in SA, which is seen as friendly for capital raising. We should be happy that we have an environment that creates companies like these.”

Quite apart from risk, the FTSE 100 is offering a dividend yield of 3.7% versus 2.8% for the JSE All Share index. The Dow Jones 30 also offers a juicier dividend yield than the JSE, despite its recent post-Trump election run-up in prices. In US dollar terms the JSE All Share index gained 40% over the last 12 months, impelled by a 20% improvement in the rand-US dollar exchange rate over the period. This made it one of the strongest performing bourses in the world last year in US dollar terms. But few expect much improvement in the rand this year, which means there will be better pickings elsewhere.

What will it take to reverse this trend of foreign selling? No-one yet appears to have an answer to that.