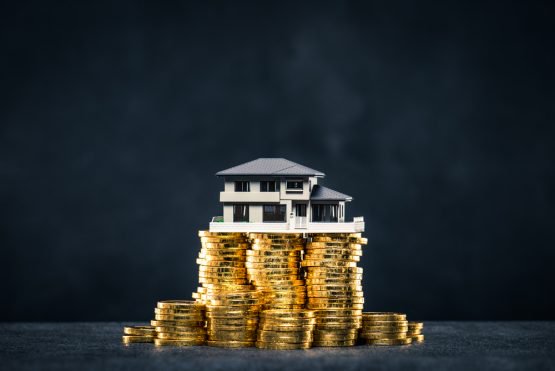 South Africa’s upper middle class are under substantial financial pressure as they pay high tax rates and get limited benefits – they therefore effectively double pay for services which their taxes should provide.

MyTreasury.co.za crunched the numbers to see the true effective tax rate paid by middle income families in South Africa. We use data analysis to help South African consumers make more informed financial decisions. Upper-middle income households, earning around R100 000 per month, are paying 22% income tax but a total effective tax rate of 51% when you factor in the public services that these South Africans have to fund themselves, because the state is not living up to its obligation to provide good quality services that should be covered by their taxes.

Citizens pay taxes to fund infrastructure and public services. At the most basic level, these goods include security, education and healthcare which are provided by the state in most countries. However, due to well documented problems with South Africa’s state-provided education, healthcare and crime prevention services, families with higher incomes are compelled to obtain them privately. In addition, there is no state pension in South Africa and individuals need to save a percentage of their income for retirement.

My Treasury’s analysis has revealed the extent of this double tax on middle- and upper-income families. It’s no wonder these South Africans are angry that their taxes fund security upgrades at Nkandla and yet they’re also forced to pay themselves for armed response at their homes.

MyTreasury.co.za based its calculations on a household of two adults and two school-going children. 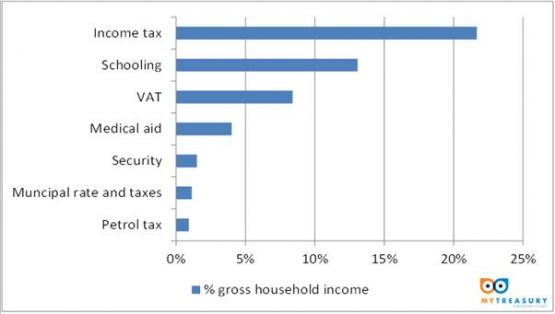 In our hypothetical household, parent A earns a gross salary of R61 667 per month, or R740 000 annually. Parent B earns R38 333 each month, which is R460 000 per year. Their combined gross monthly income is R100 000. However, their take home pay is reduced by contributions to pension funds of 10% of their gross income as savings for retirement.

Breakdown of the total tax burden

The most significant tax is income tax, which consumes approximately 22% of this household’s gross income[1]. This tax typically is deducted from pay cheques every month and paid over by employers to Sars on behalf of employees. But it doesn’t end there. There are also municipal rates and taxes [2] and consumption taxes on household purchases (fuel tax[3] and VAT[4]) – these amount to approximately 10.5% of gross household income. Traditional taxes therefore come to approximately 33% of household income.

That’s comparable to high tax developed countries like the United Kingdom[5], but this does not include the additional cost of having to pay for public services privately. In many countries, people in this income category are inclined to use quality public services. Only the super wealthy in these countries can afford to pay for them privately.

When these services are included, the real upper middle income tax bill in South Africa climbs to over 50%. Private schooling for the two children is a major expense. While South Africa’s most elite private schools have tuition fees of over R220 000 per student per year, MyTreasury.co.za assumes more moderate total tuition expenses for both children combined of R156 000 per year (R13 000 monthly)[6]. A basic family medical aid is about R4 000 per month (R48 000 per year). Security, an alarm system connected to armed response, is around R1 500 monthly (R18 000 per year).

This family is thus required to fork out an additional 18.6% of their income for healthcare, schooling and security, taking their effective real tax rate to a whopping 50.7%.

There are obvious historical reasons for South Africa’s small tax base. It reflects the extremely unequal distribution of income and wealth in the economy. But a closer look at household expenditure reveals that while middle- and upper-middle income families are obviously not poor, it is this group which is really feeling a hard tax pinch. Ultimately, if the standard of public services was raised by government, the higher tax burden on the middle class would reduce.

[1] This is calculated after taking into account rebates and allowable deduction for pension fund and medical aid contributions.

[2] Municipal rates and taxes calculation is based on a Johannesburg property worth R2.2 million.

[3] The fuel tax is based on petrol consumption of just under 100 litres per month per car (an approximate average for a Johannesburg based driver under city normal conditions).

[4] VAT is charged at 14% on the purchase of most goods and services.

[6] This has been benchmarked against a popular private school with campuses across the country.

Michael Kransdorff is chief economist and co-founder of My Treasury.