Recent retail trading updates point to consumer pressures that have sunk the sector into a deeper malaise.

The precarious prospects of South Africa’s retail sector were confirmed by recent sales updates from major retailers, which suggested that hard-pressed consumers continue to limit their spending.

“It’s quite clear that consumers are already feeling the pinch of a recession,” said Wayne McCurrie, senior portfolio manager at Ashburton Investments.

Consumer confidence has sunk to its worst level since 1982, according to the FNB/Bureau for Economic Research. Woolworths, Massmart and Shoprite could probably attest to this, as downward sales are now the new normal.

Grocery behemoth Shoprite appears to be riding out the perennial slump better than its peers. In the year to June, turnover grew by 10.4% to about R140.7 billion, with the help of the decent performance of its South African supermarkets. On a like-for-like basis, turnover grew by 5.8%.

Shoprite has had relative success outside South Africa over the last ten years, which has created shareholder expectations of sustained higher profits. The retailer is now reeling from its rest of Africa operations, which have been impacted by lower commodity prices and currency devaluations.

Like-for-like sales grew by 6.9% in its South African operations versus 1% in the rest of Africa. 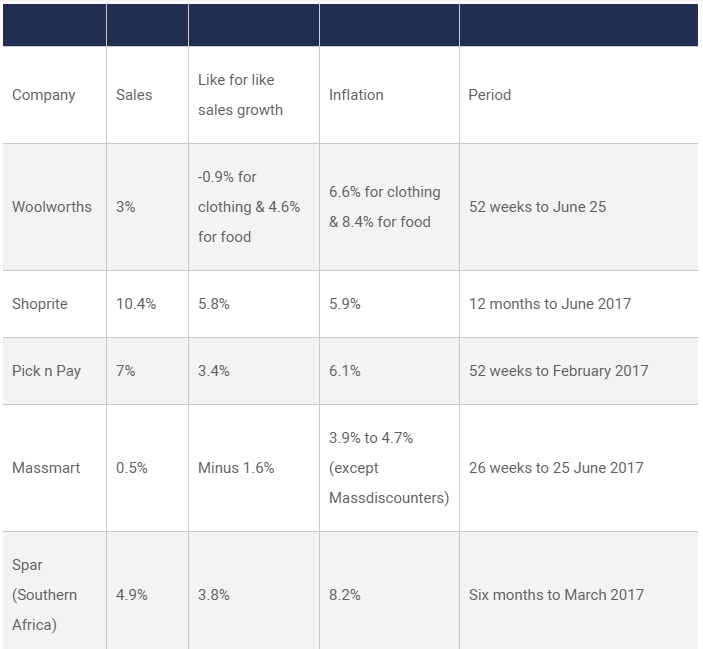 “The fact that Shoprite is the only food retailer showing positive like-for-like growth in sales means that it’s taking market share from competitors in a tough retail environment,” Abraham told Moneyweb.

Emerging more bruised is Massmart, the operator of Game, Builders Warehouse, Dion Wired and others, whose sales for the 26 weeks to June 25 fell by 2.7% when excluding inflation of 3.2%. Food sales grew by 3% and non-food declined by 2.9%.

“Massmart’s business model is based on high volumes and low inflation. However, economic fundamentals in South Africa have been [the] opposite to its business model. In a low volumes market it’s difficult to grow volumes,” said Abraham.

Also under the cosh is upmarket Woolworths; its group sales rose by a meagre 3% for the year to June 25.  The theory that food is more resilient than clothing during tough times proved true as sales in Woolworths’ South Africa clothing and general merchandise division grew by 1.4% and growth in the food division increasing 8.6%.

Market watchers are uneasy about the slow pace at which Woolworths’ Australian business David Jones is moving. When the business was acquired nearly three years ago, it was tipped to transform Woolworths into a substantial retailer in the southern hemisphere, giving it a neat rand hedge. However, David Jones’s sales increased by 1% in Australian dollar terms while comparable store sales declined by 0.7%.

Australia’s retail malaise, which has been worsened by slower economic growth due to lower commodity prices and muted consumer confidence, continues to create a difficult environment for Woolworths.

Investors in retail shares are already pricing the downbeat sales. Woolworths’ share price has sunk by 17% so far this year.

Anthony Rocchi, portfolio manager at Rexsolom Invest, said the derating in Woolworths’ share price is justified as its “Australian turnaround is lagging investor expectations at a time when South Africa is facing headwinds”. McCurrie supported Rocchi’s view, saying that at a price:earnings ratio of 13, the stock is cheap considering its recent peak of 29.

Massmart’s stock also joins Woolworths, falling by 14% so far this year. Shoprite is the antithesis of the sector decline, with its stock up 20%, giving a p:e ratio of 21, which analysts rate as expensive. “Shoprite has not priced in the poor trading conditions. My reasoning for Shoprite trading at a premium is due to it not being exposed to more cyclical apparel and its established presence in Africa which is an ‘easy sell’ to foreign investors,” said Rocchi.

Arguably, the next six to 12 months will be testing for the resilience of retailer’s corporate strategies. Consumer price inflation, which fell from 5.4% year-on-year in May to 5.1% in June, is expected to decrease in 2017 (especially food inflation).

Damon Buss, the equity analyst at Electus Fund Managers, said declining food inflation is generally not good for food retailers as it lowers sales and the quantum of rebates they get from food and consumer goods producers.  The rebates are calculated on a percentage of total sales.

“This slower top line growth will require strong cost control just to hold margins flat and hence we think there is a risk to the downside for consensus headline earnings per share growth expectations,” he said.

Massmart says its operations not affected by Saccawu strike
2 weeks ago
2 weeks ago
PREMIUM!

Massmart says its operations not affected by Saccawu strike
2 weeks ago
2 weeks ago
PREMIUM!