Edcon’s sales in the most important quarter of the year for all retailers have surprised on the downside, with the group describing trading performance as “weaker than expected”. Early signs of a turnaround in the retail giant were, perhaps, premature (read: Signs of a turnaround at Edgars?).

Excluding Legit, the exit of unprofitable international brands – such as River Island, Tom Tailor and Lucky Brand – as well as accounting for the alignment of the quarter, group retail sales were down 3.8%, or R308 million, from R8.018 billion a year ago. (Comparing the periods directly is not wholly accurate as the prior year’s third quarter ran until Christmas Eve (24 December), while this year’s ran until the 23rd). Like-for-like group retail sales (excluding any store closures or openings) were even weaker, down 4.9%.

Jet, the group’s discount division (which now includes Edgars Active), fared okay. Sales were down “only” 1.3% year-on-year in the three months.

But it is Edgars where the headaches remain. Retail sales in this division (which includes Red Square and Boardmans) decreased by 6.3% in October, November and December, when compared to the exact same period a year ago. Most of the pain came in December, with sales 2.9% lower year-on-year in October and November (combined), but down 11.4% in the last month of the year. * All figures in rand millions

The group says sales in ladieswear and footwear grew for the third consecutive quarter in Edgars (ladieswear continues to trade positively in Jet as well). However, “cosmetics, menswear, childrenswear, homeware, cellular and active clothing retail sales decreased when compared to the third quarter [of FY] 2017”.

The group “tightened its credit scorecards” during the third quarter, which led to the 9.2% year-on-year decline in credit sales. Credit sales were down 9.5% in each of the Edgars and Jet divisions. Cash sales performed better, but were still negative year-on-year (-3.5%). 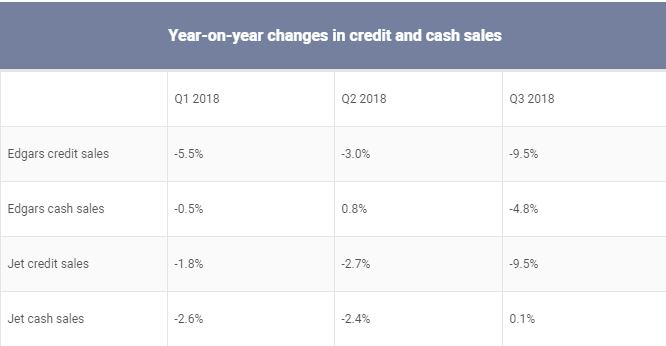 While Edcon says it has “made good progress in respect of finding a securitisation solution for the group’s own book”, this remains a handbrake on growth. With tighter lending criteria in place, its in-house receivables book was R790 million as at December 23. This is a sharply lower increase from the R660 million as at September 23, versus growth in previous quarters.

Gross margins improved in both Edgars and Jet (to a comparable 41.4% and 35.1%, respectively). In the Specialty division (which includes CNA and the mono-branded international stores), gross margin improved to a comparable 34.9%.

Pro-forma Ebitda (aligned to Christmas Eve) for the quarter was R662 million, a 26.6% decrease from the R902 million a year ago.

Today, the group looks vastly different to the one which laboured under a huge debt load since being taken private in 2007. The restructuring of its debt last year saw this reduce from R26.7 billion to around R7 billion. But, R2.876 billion of this is due by September 30 (under its super senior liquidity facility and super senior credit facilities). It says it is in negotiations to refinance these, and has secured a number of waivers from lenders with regards to interest payments and covenants. It has asked lenders for consent to add additional credit facilities of up to R1 billion.