Trump says SA is ‘rich’. He has a point

Surely there are more than just ‘developed’ or ‘developing’ economy categories? 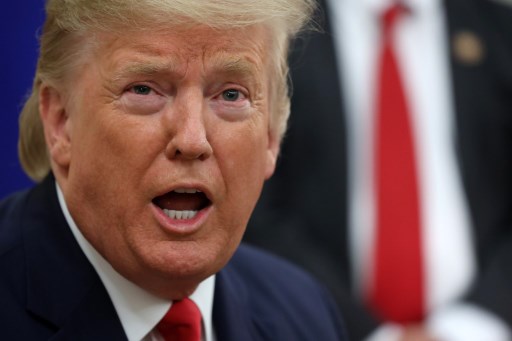 US President Donald Trump speaks to members of the media during a meeting with Prime Minister of Greece Kyriakos Mitsotakis in the Oval Office of the White House January 7, 2020 in Washington, DC. Picture: Alex Wong / Getty Images / AFP

US President Donald Trump unleashed a flurry of criticism when he remarked that a lot of countries categorise themselves as developing countries “to avoid World Trade Organisation [WTO] rules to get special treatment”.

He clearly explained his trade policy to the world within the maximum number of characters that Twitter allows: “The WTO is BROKEN when the world’s RICHEST COUNTRIES claim to be developing countries to avoid WTO rules and get special treatment. NO more!!! Today I directed the US Trade Representative to take action so that countries stop CHEATING the system at the expense of the USA!”

That was some six months ago and last week America announced the outcome of a review of its list of countries that enjoy preferential trade terms. It said the previous list, dating from 1998, was obsolete.

The US trade department removed 25 countries from the list of least-developed countries, mentioning that investigations, whether nations are harming US industries with unfairly subsidised imports, are unnecessary.

Trump is probably right. China established itself as the manufacturing and trade behemoth of the globe decades ago – all the while receiving criticism of its manufacturing processes ranging from environmental damage, unfair labour practices and low regard for human rights to shoddy safety concerns for workers and customers alike. Overall, its system of manufacturing and trade is skewed in its own favour by the blatant manipulation of its exchange rate.

What the figures say

Figures from the World Bank and the International Monetary Fund (IMF) bear out Trump’s arguments that China, at least, should not be allowed to demand preferential trade terms. In economic terms, China is second only to the US measured by its total gross domestic product (GDP) if one accepts that GDP figures and their variants are suitable measurements for wealth.

Read: Is GDP still a good measure of economies?

The IMF calculated China’s nominal GDP for 2019 at $14.1 trillion ($14 100 billion) compared to America’s $21.4 trillion. It estimates total world GDP at just above $82 trillion, meaning that China produced around 17% of the world’s good and services last year.

Basic economics teaches us that nobody will produce something that they can’t sell, and that production thus equals income. China, with an income of $14.2 trillion is indeed one of the world’s richest countries.

Trump also specifically mentioned India. The IMF ranking puts India in fifth place with a GDP of $2.9 trillion, just behind Germany and ahead of the UK, France and Italy.

* Figures exclude Taiwan and the special administrative regions of Hong Kong and Macau.

It made local headlines last week that the US – if not Trump personally – suddenly decided that SA is a rich country.

According to GDP figures, SA is not a “poor” country. It is ranked number 35 on the list of 185 countries. We are in the top 25% in the world in terms of nominal GDP.

‘One or the other’ inadequate

The effective reclassification of the 25 countries from developing countries to developed countries for purposes of trade concessions shows that classifying countries as either one or the other is totally inadequate.

Where would one draw the line between rich and poor on the above list of GDP figures? Drawing the line in the middle of the list would assume that all the countries listed to number 92 are rich and those from 93 to 185 are poor.

Tunisia is at 92 with a nominal GDP of $38.7 billion and Cameroon is at 93 with a GDP of $38.6 billion. That the figure of around $39 billion is equal to less than 0.2% of the GDP of the US clearly shows that it is simplistic to put the distinction between developing and developed countries in the middle of the list.

Putting it at the average number instead of the mean also yields a nonsensical answer.

That would result in only 24 countries in the world being classified as rich, with Belgium being regarded as the poorest of the rich with a GDP of $517 billion. Austria, Norway and the United Arab Emirates would then be considered poor.

However, the IMF mentions that comparing nominal GDP doesn’t take into account differences in the standard of living from country to country. One of the big shortcomings when using nominal GDP as a yardstick is that figures can change significantly from year to year due to changes in exchange rates.

This ranking puts China way ahead of the US and moves India up to the third spot. but it still does not change the problem of where to draw the line between poor and rich.

The list of the 30 richest countries based on PPP GDP still includes SA (number 30), as well as Brazil, Thailand and South Korea – which were all taken off the US list for special trade deals, along with China and India.

Read: Why Korea has first-world economy and developing-market currency

It is interesting (and clever) for Trump to refer to different countries and nations in his arguments and not to people. The richest countries are not necessarily home to the richest people, as analysis of GDP per capita shows.

Well-to-do countries with relatively small populations head the list when ranked by GDP per capita. Tiny Luxembourg is number one with a per capita GDP of $113 196, followed by Switzerland ($83 716) and Norway ($77 975). The US drops to number 7 with an average of $65 111, far behind Luxembourg. Their huge populations push China to number 65, Brazil to 72 and India to 139.

Once again, where should one draw the line between rich and poor? The mid-point is between SA with $6 100 and North Macedonia with $6 096. This line would rate SA citizens as rich, despite our average annual GDP per capita being less than 10% of that of our US counterparts

The world average of $11 355 indicates that there are only 60 countries on the list of 186 where per capita income is above average. India’s citizens are suddenly poor, with a per capita GDP of only $2 171.

Selection of countries ranked by GDP per capita

The Swedish doctor and academic Hans Rosling wrote in his book Factfulness that one of the major misconceptions in the world is that people divide the world in two. “I’m talking about that irresistible temptation we have to divide all kinds of things into two distinct and often conflicting groups, with an imagined gap – a huge chasm of injustice – in between.

“It is about how the gap instinct creates a picture in people’s heads of a world split into two kinds of countries or two kinds of people: rich versus poor,” says Rosling in one of the first paragraphs in the first chapter.

Factfulness introduced a different way of looking at figures and a novel way to draw graphs to break down the temptation to see only two categories.

Its final analysis finds that the bulk of the world’s population falls right in the middle between rich and poor – in that gap that most people fail to recognise.

The book makes the point that this is the case when using any figures that measure development and living standards, including level of education, nutrition, infant and child mortality, access to clean water, household income, size of families, economic growth and life expectancy.

The graphs in the book show that the bulk of the world’s population is neither rich nor poor. Based on 2017 figures, the conclusion is that most of the world’s citizens fall within a per capita GDP range of around $2 500 to $25 000.

The minority fall outside this admittedly wide range. The poor minority reside mostly in Africa and the rich minority in Europe, America and Japan.

Rosling forecasts that life will get much better for the middle block by 2040 and that the poor minority will nearly halve in number to 600 million, while the population in the middle will remain the majority with some 6.8 billion people. The rich will number around 1.7 billion in 2040.