The Curban Urge device helps to deliver a shot of air into a smoker's lungs in a way that mimics accelerated air travelling into the body when smoking.

With the unexpected lockdown announcement that cigarettes would no longer be for sale, many smokers have had to suddenly go cold turkey over this month, and the looming possibility of an extension to the lockdown means many more might be affected once their stocks run out.

Curban Urge, a small plastic, flute-like prop being marketed by local inventor and artist Darren Aiken, may help to ease some people through at least one part of the craving by mimicking some of the physical actions and effects of smoking, but without any of the harmful smoke.

It can’t help with the nicotine withdrawal, but used in combination with patches or other solutions, Aiken says his little Curban Urge device has been proven to help. 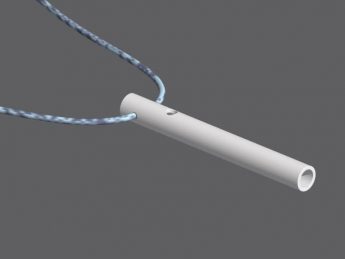 A computer render of the device.

Patented as a way “to curb addictive behaviour”, the 70mm-long resin cylinder is closed on one end to form a vacuum chamber with a hole in its barrel to accelerate air into it when sucking in and releasing the index finger off the vacuum hole.

This apparently closely mimics the concentrated feeling of air entering your lungs when smoking and offers all the habitual hand and air movements that can ease the brain’s craving for engaging in the near-ritual smoking act.

The small device hangs on a lanyard around the wearer’s neck and looks like it could be made of bone or ivory.

“It is more accessible than a packet of cigarettes and, if used whenever the smoker has an urge to smoke, it will take the craving away and reduce the urge to smoke that cigarette,” says Aiken.

“The deep breath this accelerated air affords the smoker – because the shaft of air accelerated into the back of the mouth is narrow – bypasses the ‘scratch zone’ in the smoker’s mouth and produces a sigh before exhalation, which appears to destress the smoker as the body’s mechanism for de-stressing is a physical sigh,” he adds.

He says that Curban Urge could be an ideal substitute for smokers who can’t buy any tobacco products during the lockdown period.

He wants to bring it to the attention of the government’s disaster management team and raise awareness of it among supermarket and pharmaceutical chains who can still sell during the lockdown.

“I cannot distribute to smokers and addicts from my website, as I am prohibited from distributing during lockdown. Hopefully we can raise this awareness.”

He says the suggested retail price of his device is around R80.