'2021 should be the fifth year that average headline CPI is below the 6% upper band of the SARB’s 3%-6% target range, confirming that inflation is well under control in South Africa.' 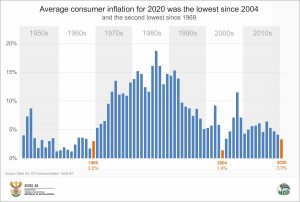 The average annual inflation rate for 2020 was 3.3%, according to the December 2020 Consumer Price Index (CPI) released by StatsSA on Wednesday. This is the lowest annual average rate since 2004 when it was 1.4% and the second lowest since 1969 when it was 3.0%.

The main driver of inflation in December was the food and non-alcoholic beverages category, with a monthly increase of 0.5% and an annual rise of 6.0%, up from November’s annual reading of 5.8%.

This is good news

She says headline inflation came out in line with expectations at 3.1% year-on-year, based on a 0.2% month-on-month growth rate, compared to 3.2% year-on-year in November.

“This is still comfortably in the SARB’s 3%-6% target band for the 45th consecutive month.”

Kruger explains that December is a high survey month with quarterly surveys of actual rentals, owners’ equivalent rent, domestic worker wages, taxi, bus and train fares and motor vehicle insurance all impacting the outcome, over and above the normal monthly drivers, such as fuel and food prices.

“The main drivers of the monthly change of 0.2% were higher food prices that added 0.1 percentage point and a 0.1 percentage point contribution from the ‘residual item’, implying that a number of low-weighting items increased to cumulatively contribute to the monthly change. No big price movements evident in the basket, despite the high survey month.

“Core CPI remained unchanged at 3.3% year-on-year, reflecting very low underlying pressure on consumer prices in South Africa, a phenomenon reflecting the recessionary economic conditions, which is not conducive to opportunistic pricing, but rather an environment of very low margins.”

Kruger forecasts that headline inflation will trend higher to average at 4.2% compared to 2020’s actual average of 3.3%.

“The upward trend in consumer inflation will be driven by higher fuel prices, as the international oil market recovers in-line with a recovery in the global economy, plus higher fuel taxes, a higher electricity price increase and higher food price inflation.

“These upward forces will be tempered to some extent by subdued pricing of consumer goods given the sluggish demand environment and less pressure on services inflation,” she says.