For the most part, the more mature stand-up comedy in South Africa is embedded with social messages designed to leave the audience with something beyond mere laughs. 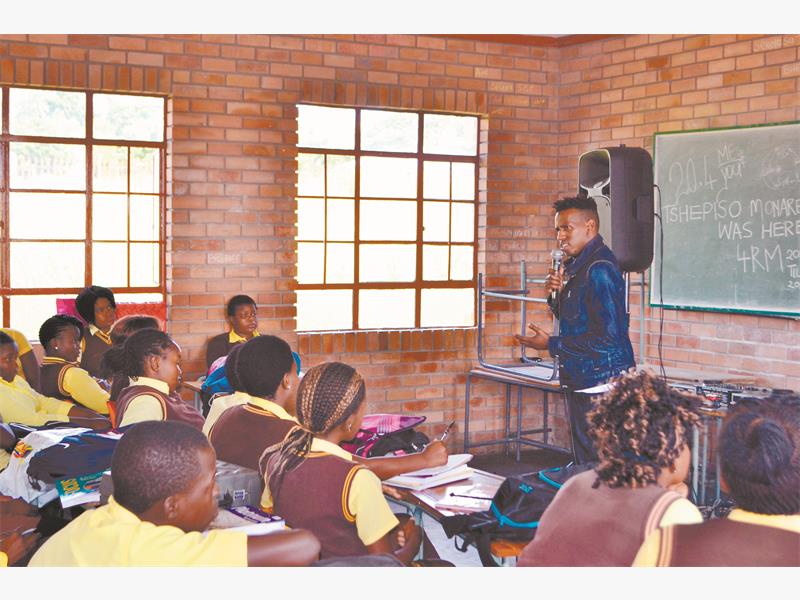 FUNNY. The Napsta (left) with a learner after a motivational talk.
Pictures: Supplied.

As with most art the audience might miss the intended message though, as the gags might muddy the waters and the high-energy nature of stand-up performances could also lead to the messages getting lost.

The Napsta, real name Napoleon Masinga, is using comedy as a formalised motivational tool for high school kids. Giving back is in vogue these days, with many entertainers involved in projects ranging from motivational talks (DJ Sbu) to providing bursaries (Mo Flava) and organisations collecting books for libraries or donating blankets in winter. Masinga’s idea is especially interesting because using comedy to disarm generally disinterested youth makes sure that they can pay attention to the messages that they should hear.

Masinga’s Comedy School Project is described as “An edutainment initiative designed to reach out to high school learners. The main objective is to inspire and motivate learners through Christian comedy”.

“Every day, we hear of violence and substance abuse increasing in our schools. Most parents and teachers are doing the best they can to address these issues, but it is often not enough. Today’s world is spearheaded by technology and social media, which means the youth are experiencing many pressures and challenges that are much more complex than what the older generation experienced. Comedy is a great tool to get young people’s attention because I usually start my set with laughter so they can relax, and then towards the end I leave them with a big message or take-away.”

Masinga acknowledges that there are a lot of people playing on the corporate social investment (CSI) stage, and that he hopes that people are doing it for the right reasons.

“I think most artists or young businesspeople really look up to older businesspeople like Bill Gates and Warren Buffet – and they all have a pedigree of giving back,” says Masinga.

“The secret to greatness really lies in sowing back into your community. That is what I truly believe in as a person and as a Christian too. I hope that everyone else is also doing it for the right reasons, but all I can say is that there is an enormous amount of fulfillment involved in giving back.”

The Comedy School Project is not only designed to motivate learners through comedy. It also offers help and support to learners from very disadvantaged communities by donating school shoes, uniforms, stationery, school fees, books and sometimes even paint for classrooms in bad condition.

Last year the project visited various schools in Gauteng, includinge the National School Of The Arts, Heartwood and Vector College.