The rebirth of talented songstress Berita

The Thandolwethu hitmaker shares her journey and struggles as a musician. 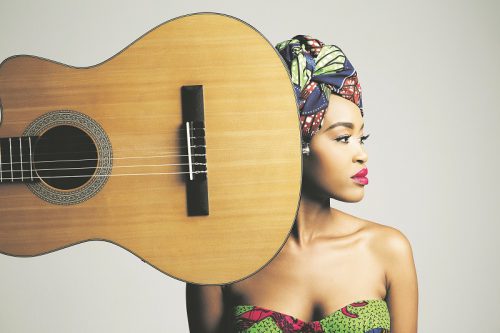 With her blissful tenor toned voice, Surprises by Berita is an inspirational and exciting tune that lyrically uplifts spirits with each intoned harmony, as the Afro-soul singer sheds some positive light on her outlook of life.

A self-taught guitarist and phenomenal Afro-soul songstress, Gugulethu Khumalo, better known as Berita (originally her mother’s name), embodies the essence of what it means to be a daughter of Africa. At the age of 26, this talented female artist has already made waves in the SA music industry based on her award winning debut album Conquering Spirit, which feature the chart topping love ballet Thandolwethu,  back in 2011.

Both vocally gifted and intelligent, Berita grew up an academic in a family of seven, including five younger siblings, in Bulawayo, Zimbabwe. Her parents, both farmers, did everything they could to ensure that their daughter’s future was as bright as she imagined, so when the opportunity to move to New Zealand as a way of securing a sustainable income arose, they took it and shipped young Berita and her siblings along. However, this talented music enthusiast had plans of becoming a star in her continent of birth.

“My mom and my dad did not think I would have become a creative. I don’t blame them as I was very academic and even went as far as to write a book as a child,” says the bookworm turned singer.

Leaving her family with the secret ambition of pursuing a career in music, Berita enrolled at the Nelson Mandela Metropolitan University in Port Elizabeth for a BCom degree, at which she excelled and ended up on the Dean’s list.

On arrival at the airport in the Eastern Cape, young Berita took to the streets to find out where the hippest open-mic session venues were, which led her to a popular hangout spot called The Sessions. But that was only after singing her lungs out for fellow classmate and res friends.

“I used to sing for strangers who would have been referred by other people who had heard me sing before; they would then refer me to open-mic venues in townships and around town.”

It was during her jazz club-hopping days that Berita met her best friend Busi Smith, who helped write the hit breakout song Thandolwethu. It is essentially this song, combined with her uncle’s connections, which saw Berita land her first recording deal and eventually releasing her first album titled Conquering Spirit.

The song took the country by storm and was played across national radio stations like Metro FM, however unfazed by the limelight; Berita chose to concentrate on her studies and craft, which saw the release of her second album Songs of Empowerment.

On this album she worked with internationally renowned African jazz and soul singers Hugh Masekela and Oliver Mtukudzi on a song titled Mwana Wa Mai. The song got attention on the metropolitan regional radio stations Power and Kaya FM but, sadly, with the second album also came rejection from her fans. Berita was forced to face the reality of every other new artist hoping to break onto the scene. But being the optimistic soul she is, she went back to the drawing board.

“When my first album came out I was naïve, I was only 21 and had only been living in South Africa for a year. With the second album I had issues with the record label I was signed to then. However, I am grateful for that experience as it taught me a lot about the music business side of things.”

Her latest offering is an album which is due to be released next month. On the album, Berita has collaborated with many legends, including Tressor, Linda Gcwensa and lastly the princess of Africa, Yvonne Chaka-Chaka.

If the radio charts are anything to go by, then the third Berita album will reassure her fans that she is here to stay.

The many hidden talents of actress Enhle Mbali