The former model and celebrity stylist is taking SA men's fashion to the next level. 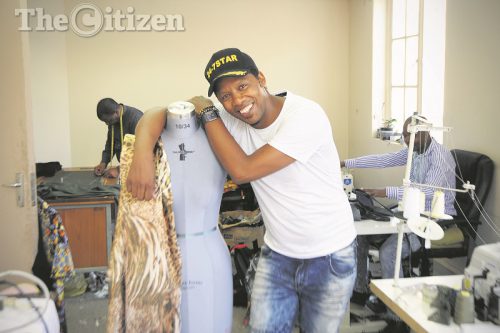 Reincarnating the ’80/’90s pantsula men’s fashion trend with contemporary urban chic textures and colour, Ephraim Molingoana of Ephymol Designs, aims to bring back the style and edge of Kasi (township) life to the millennium techno man.

Molingoana’s spring/summer men’s collection 2017 is one that he aims to pay homage to an era which was pivotal to his character and career as a designer.

Having started out as a model and the first African face of men’s denim brand Diesel in the ’90s, then leaning towards becoming a celebrity stylist before finally finding comfort in being a designer, Molingoana is not just your average Jack.

His qualification in advertising from AAA distinguish him from the rest as well as allow him a competitive advantage in the fashion circles. To top it off, Molingoana is among the pioneers of menswear designing in South Africa. “I am glad I come from the old school, there is nothing I believe I can’t do because when I started, you had to be able to adapt fast to change and never limit yourself to learning new skills. From being a model I had to know everything that happens on and off the ramp.”

It is without a doubt that Molingoana has paid his dues and is now comfortable with reaping the rewards.

“I believe South Africa’s fashion and entertainment industry is what is it is today because of the ’90s, the personalities we formed then have thus given birth to the celebrities we admire today.

“The likes of Lebo Mathosa, Mandoza and Thembi Seete have paved the way for the queens and kings today.”

Shortly after his venture as a model, young and ambitious Molingoana sought inspiration in styling which then earned him the title of celebrity stylist and the privilege of working with leg ends such as ’90s kwaito popstar, Mandoza, in fact it was Molingoana who was behind the kwaito star’s image transformation from kasi pantsula looking guy in typical slacks and bucket hat and white vest to macho, ladies’ man and Italian mafia-looking black leather trenches, gold chain and designer sunglasses.

“Mandoza has always been a stylish young man, and when we met he knew me as a model but I corrected him as I had then began styling. From that day till his death, we worked together on his videos, photoshoots for his albums and publicity as well as his wedding.

“When I started designing and showcasing at fashion week in 2002, I debuted with a range titled Pink Panther: it had bold colours, prints and everything that I had been told men wouldn’t want, however, they were the one’s thanking me,” admits Molingoana as he describes the use of colour and texture in a design.

For the designer, the Ephymol designs signify the rebelliousness of men through fashion, a brand which allows men to be individuals and break the myths of men wearing bold prints and colours.

Based in the heart of the Johannesburg CBD, Ephymol Designs seeks to redefine what it is to be a stylish man in 2017.

For Molingoana, having a 360 degree career in fashion has allowed him to take into consideration what men really want, how they would like it and why.

As a model he got the chance to explore the world through travel, though it is specifically in Soweto he found peace and resonance.

With 15 years of menswear designing, Molingoana shares insight on his 2017 spring/summer collection which he will showcasing tomorrow at the South African Fashion Week in Johannesburg’s Hyde Park.

“The inspiration for this range is really about me going back to my roots. Celebrating the era that made me the person I am today. The ’90s were a turning point for me, everything happened; from my modelling career, to graduating, first kids and basically everything I value today, took place in the ’90s.”

It seems as the era of the ’90s was as significant to Molingoana as it was for the country as a whole, given the political changes which took place, the liberation of African people both in the country of their ancestors as well as from the prisons which were in their minds.

The collection spans from classic red carpet suit looks which border on the bases of deconstructional interpretation – the use of a wrap jacket over a shirt and bowtie is unconventional to the usual tuxedo look.

“The styling of this collection is about reliving the ’90s however with a new twist. I call it fresh because the ’90s were known for being playful and creative; it’s in the ’90s that you would find men wearing shirts, ties with shorts and socks, for instance Boys 2 Men would always dress like that.”