What was once considered taboo has not only become common, but also comical. Take a young couple living together before lobola has been paid or before the couple's union has been sealed in holy matrimony. Behind the scenes of the new sitcom, Vat n Sit at Global Access studios , Johannesburg, 13 March 2014. The new show staring Liopelo Maphathe as "Mpho" and Trevor Gumbi as " Thomas" will be aired on eKasi+ . Picture: Tracy Lee Stark

For some it’s a convenient arrangement to share the costs of living, and for others its the perfect way to test a relationship before making a big commitment. A direct translation of the colloquial Afrikaans term “vat en sit” is “take and sit down” meaning to take a partner and settle down together without the formalities that come with marriage.

It’s within the conflict between a couples’ desire to do things “the right way” while also wanting to do things their own way that the sitcom Vat En Sit was created.

The show’s producers, Tumi Masemola and Mandla Ngcongwane, are no strangers to comedy or to the small screen. The couple, who own Black Brain Productions, produced and starred in the SABC1 comedy City Sesla, which won five South African film and television awards in its first season. Their formula for comedic success can be summed up with one word – relevance. “We always consider the people who we are talking to,” says Masemola.

“If people can relate and can also see themselves in your characters then you have a great show.”

Having lived together for a few years before getting married, Masemola and Ngconwane are aware of some of the challenges that come with being in a “vat en sit” relationship, but have always chosen to laugh at them.

“When you live with your partner, trying to negotiate things like money and responsibilities can be quite funny. We’ve used the sitcom to turn an issue that is sometimes frowned upon and made it a light and funny South African story,” Masemola says.

Thomas is a humble man from a township in Newcastle who is in love with Mpho, last born and only daughter of the Ledwaba family, a royal, wealthy family. Thomas would love nothing more than to marry the love of his life, but her family has rejected his lobola. While living with Mpho, Thomas starts a baking business, which he hopes will make Mpho’s family respect him despite living with their daughter before marriage.

“Before my wife and I got married, we lived with each other for years,” says Gumbi.

“Obviously the end goal is to get married, but I guess some parents worry that it might never happen.”

Gumbi admits that while he’s comfortable being in a comedic role, acting is still new to him.

“I’m very fortunate to be able to work with an experienced cast which always sets a professional tone on set,” he sets.

His co-star Maphathe, who starred in Moferefere Lenyalong is perhaps one of the most skilled sitcom actors in the country.

“Comedy is fun, but its very fast and requires a lot more energy,” she says.

Other stars on the show include veteran actor Nyembezi Kunene and Christopher Kubheka who also admitted to being in a comical “vat en sit” relationship of his own.

There’s no doubt that Masemola is passionate about producing authentic South African stories, but sometimes challenges within the television industry make it difficult.

“Our shows speaks to a largely black and disadvantaged audience,” she says.

“So as a production company, we want to include as many of those into the process of making television as we can. We have so many people coming to us and sharing stories that would make great televsion shows, but the huge lack of skill in our industry makes it difficult to do so.”

Despite the difficulties, however, Masemola doesn’t see herself doing anything else.

“Making entertainment television is a calling,” she smiles.

“I dream of seeing Black Brain Productions becoming a global company, but of course greatness starts at home.” 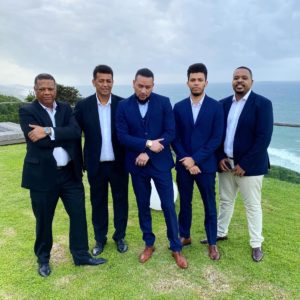