How Abigail Kubeka's journey started by going against her parents and ended with her reaching her dreams. 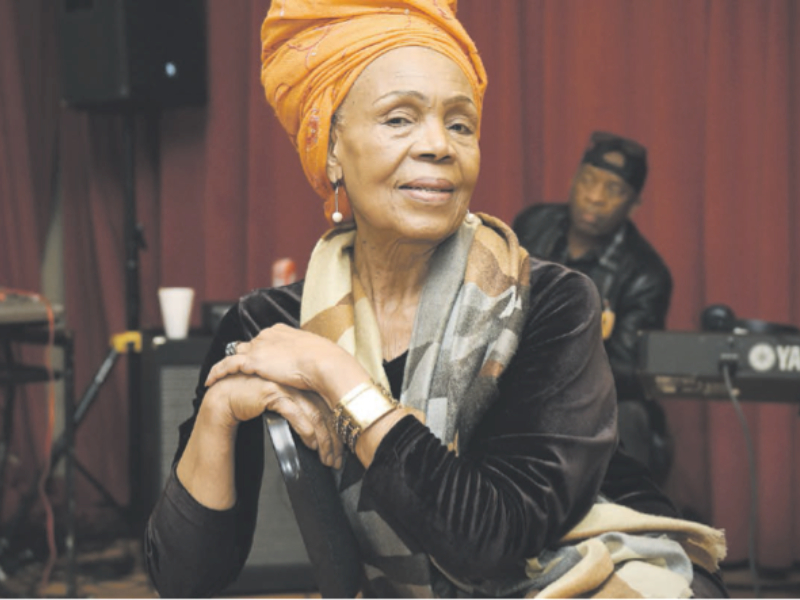 A full 77 years old or not, Abigail Kubeka’s sense of style has always been up a notch from women her age – no offence ladies.

The legendary singer and actress is well aware that the way she presents herself holds a lot of power in how people perceive her.

“Just love yourself and know what is good for you and what will not benefit you; keep a good head and remain grounded,” she cheerfully says, indicating that this can work wonders for one’s beauty.

After managing to steal a few moments of her time during her rehearsal session, and sitting down with her trying to find out what she thinks music has done for her, the singer confidently laughed and told me: “Sweetheart, I have done a lot for music. I’m doing it my way. I have contributed immensely in this music industry,” an answer I wasn’t too surprised to get from this assertive artist.

Kubeka says things were tough in the beginning, but once she had planted her seed and discovered where she was going with music, it made her journey a lot easier.

“Now I’m just celebrating myself and my life. Through music, I’m thanking God for the gift that is my voice, so whenever I perform, it’s a celebration of the talent God gave me.”

“There is a lot to learn. You live and learn every day. You don’t stop learning. You have to make the world your classroom,” she said.

“In class you have to listen to the teacher, and outside in the world it’s more difficult, more challenging, but you have to be strong and continue with the learning, and try to have direction.”

Kubeka was fortunate because when she entered the music industry she had musicians like Dorothy Masuka and the late Mariam Makeba to guide her.

“I used to sing their songs. They were my mirrors and I used to copy them,” she says.

“I was lucky because in the long run, I got a chance to work with them, which enhanced my career.”

The artist says music is not just work, it’s a profession; a difficult occupation from God.

The star says singing is storytelling, something people need to sit down and listen to. She points out that she regards herself as a teacher, a preacher through song.

Kubeka says she notices the level of respect today’s musicians give their profession, explaining that it was a different and opposite story about five to six years back. She says that unlike those that came before today’s musicians, they are not driven by fame and fortune, and the excitement of being stars, taking drugs and splashing money.

The Orlando East-born star says looking back at her life’s journey, she wouldn’t change anything. She is happy with how her journey turned out.

“I’m happy that I went against my parents, and I proved them wrong and showed them that this is a career, and it has worked for me,” she said.

She adds that her success has nothing to do with money, but the love she receives from people.

“That love is my richness. I don’t have money. I don’t know what a million [rand] is. Maybe I’ve gotten a million before, if I could count the things I have, but I have never held a million in my hands. I do, however, hear people talk about it, but that doesn’t worry me because the love I have is something not even a billionaire can get from their money.”

She says she is happy to take selfies with fans any day at malls, and is grateful for the love people show her.

She is a jack-of-all-trades and a master of all she puts her mind to – this is the sense one gets when speaking to this veteran who confidently explained all the roles she  played in the entertainment industry and all those she continues to play.

“I’ve done public speaking, dancing, singing and acting. If you are an entertainer you have to be an all-rounder, in fact these things come automatically, as you find yourself in that space.”

Kubeka says when she acts, she hears music inside her, coming through in her acting as she says her lines, and when singing the acting comes through as well, through her singing.

“Mandela gave his life for Mzansi and never got to enjoy being a father and raising his kids.”

SA hip hop at a glance: Your favourite rappers are no longer on top
13 mins ago
13 mins ago

SA hip hop at a glance: Your favourite rappers are no longer on top
13 mins ago
13 mins ago