Euphonik initially issued a statement saying both he and DJ Fresh would be stepping back from public work.

After releasing an initial statement in which they declared that they would be stepping back from all their public work engagements pending the conclusion of an ongoing case against them, DJs Fresh and Euphonik have decided they have a little bit more to say on social media.

“This is all so weird, having to explain myself about a person I don’t even know!!!!” tweeted Fresh (Thato Sikwane).

Euphonik (Themba Nkosi), on the other hand, had a question for the South African Police Service (Saps).

“Hi @SAPoliceService not sure who we can talk to but we’re waiting for a case number and eagerly anticipating details. Thank you,” he tweeted.

The case number in question relates to a case filed by a woman who initially took to Twitter during the course of last week to accuse two DJs of allegedly drugging and raping her in 2011.

Police allegedly confirmed, on Friday, that a case had been opened against two unnamed DJs in that regard. 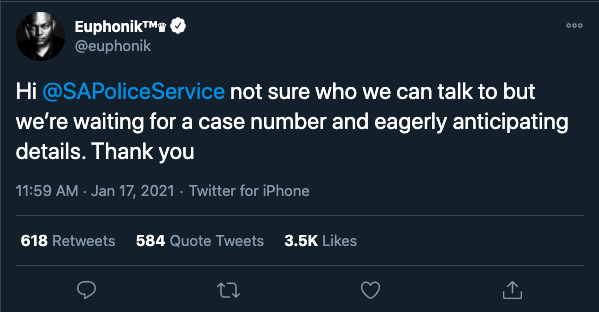 Euphonik’s action was immediately met with backlash by Twitter users who disagreed with his decision to tweet to the police instead of relying on his legal counsel to intervene.

Others felt it would have been more effective for him to go to a police station in person as opposed to tweeting to an account that the police service has admitted is not regularly monitored.

Euphonik you want to tell me you are genuinely asking this question because you genuinely want information or this is a shallow attempt to portray yourself as complying?

Even a Candidate Attorney can find you the case number without using social media.

It’s the victim that supposed to get a case number, if U are so concerned, U should be asking when is your court date to clear your name seeing that U have been lucky enough not to spend the weekend in jail. Honestly whose advising these celebrities? Yesses.

Have you ever seen @SAPoliceService give case numbers on Twitter ? pic.twitter.com/TA3F5rBey7

i wanted to see this type of comment, because saps doesn’t owe him (the alledge perpetrator) a case number. he is just arrogant

Off air during investigation

Acting Primedia Chief Executive Officer Geraint Crwys-Williams, released a statement saying that radio station 947 and Primedia Broadcasting were “evaluating all the information of the alleged misconduct” levelled against the two DJs before confirming that 947’s Fresh and Euphonik had reached a mutual decision with Primedia Broadcasting that will see the pair step down from their roles at the radio station pending the outcome of the case.

DJ Fresh has been hosting 947’s drive time show since joining the station in July 2019 while Euphonik has been on the station’s line up since 2016.

According to Crwys-Williams, this decision was taken in order to allow the pair to focus on addressing “the sexual assault charges levelled against them”.

“We take these matters extremely seriously and apply a rigorous, systematic internal process to assess them,” Primedia said.

On Saturday the pair shared the same brief statement:

“In light of the serious allegations levelled against us we’ve decided to step away from all public work engagements until such time that this matter has been resolved and the law has taken its course,” read the statement.