After a flurry of publicity for the first season of The Great South African Bake Off, last night's would-be show premiere flopped. Instead of airing the first episode of the show, BBC Lifestyle aired a Great British Bake Off Masterclass episode. 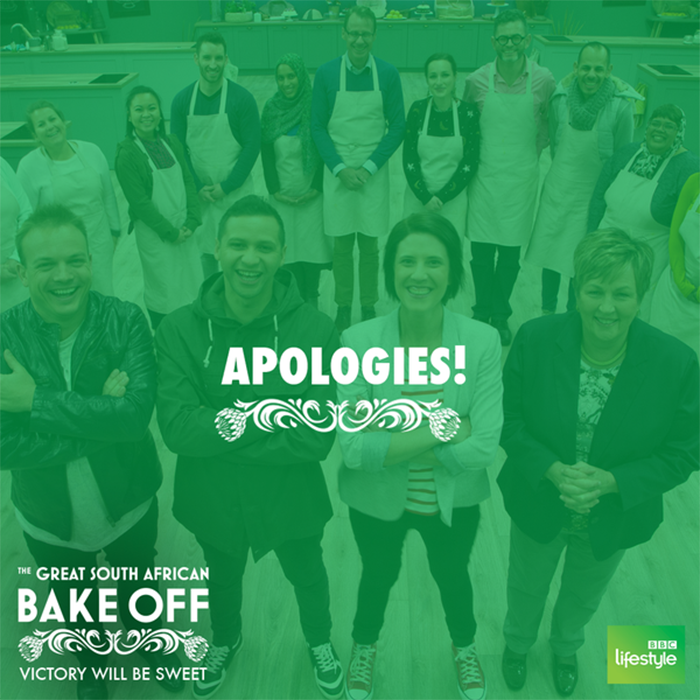 BBC Africa apologised vehemently after the flub, and promised they would air a double bill of episodes next week. They have changed their minds since and promised that The Great South African Bake Off will start tomorrow night, October 8.

The show follows in the footsteps of Great British Bake Off, that orginated the popular baking challenge show that has amateur bakers vie for the title
of the Best Amateur Baker.

The Great South African Bake Off airs on BBC Lifestyle and is the first local commission on the channel since the very popular Come Dine with Me:
South Africa. Looking at the contestants, judges and presenters, BBC Lifestyle could have a big hit on their hands. The new show will follow the
same formula as the British mother series, but will be distinctly South African.

Shot in the Cradle of Humankind on the West Rand of Gauteng since August, the show will see amateur bakers take part in a signature challenge,
technical challenge and showstopper challenge where they have to impress with their kitchen skills to present showstopper baked goods, referred to as
“bakes”, during 10 episodes.

The show has become an international phenomenon, and the hope is that South Africans will also get engrossed in this witty show featuring colourful
amateur bakers. The comical duo Anne Hirsch and Donovan Goliath are teaming up to host the show, and since filming started the two have been putting their unrivalled talent to good use to cook up puns and jokes – as well as being a friend to the 12 contestants.

“I befriended the contestants before the start to ensure there is someone comforting around when the cameras start to roll,” Goliath says. He knows
the pressure that contestants will be under during filming, and also that this is their first time in front of the camera. This is one of the ways
Goliath and Hirsch are taking ownership of the South African production.

“We want to make the show our own as well (not be a replica of the British show). We have such a great relationship that we work well together, we sync when it matters.”

Judges for the infectious show are acclaimed South African kitchenistas Tjaart Walraven and Shirley Guy. Guy is known as the writer of over a dozen food and cook books and her input in numerous magazines, while Walraven is known as the guest chef on TV’s Expresso and Top Billing. Both are relieved that although they decide which contestant to cut during each round of the competition, they don’t have to make the announcement. They also have to be professional throughout.

“Internally I want to tell them when they do something wrong. With my training background it’s my first instinct to help them. But you just can’t
sometimes,” says Walraven.